Howard played a clip of JD talking about Robin’s skirt-and-stockings outfit on yesterday’s Wrap-Up Show: “JD’s quite taken with Robin in some weird way. He couldn’t articulate how he was feeling.”

In the clip, JD tried to explain why he took notice: “Listen i-i-it’s not–I’m not even like a big fan of the stocking look or whatever. Um and you know, I-I actually–you know, but I haven’t seen Robin like that before with her thigh-high boots.”

Later in the clip, Gary said he was also impressed with Robin’s look: “Her boobs were huge and she was wearing a very clingy shirt.”

When Jon and Gary asked JD if he was sexually attracted to Robin, JD begged off: “I see Robin more as a sister than anything else so it’s not like it does anything for me. What the hell is so funny? We work together and stuff.” 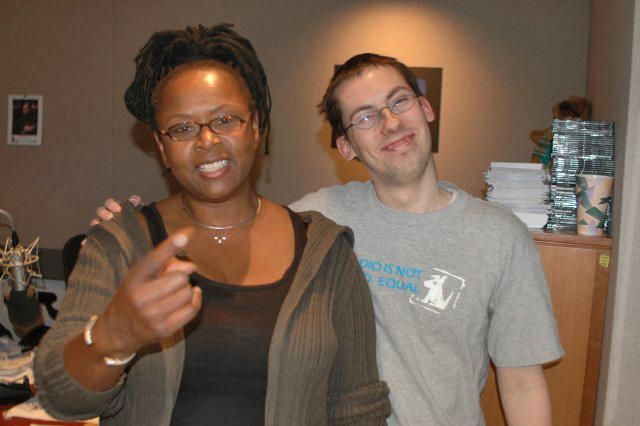 Jon and Gary pressed him, so JD explained: “Well, no. I mean, no. Listen, no. She just, uh, you know–depending on what I would–I wouldn’t say no. I just wouldn’t say I was, like, overly attracted or anything, you know. No. I’m not. Yeah, yeah, yeah. It’s like, you know. No. It’s not like that. It’s just, you know, I love–I-I like her. Listen, she told me she would stab me in the pencil–in the eye with a pencil. It’s hard to really be attracted to somebody after that. After that level of violence that they would happen to you.”