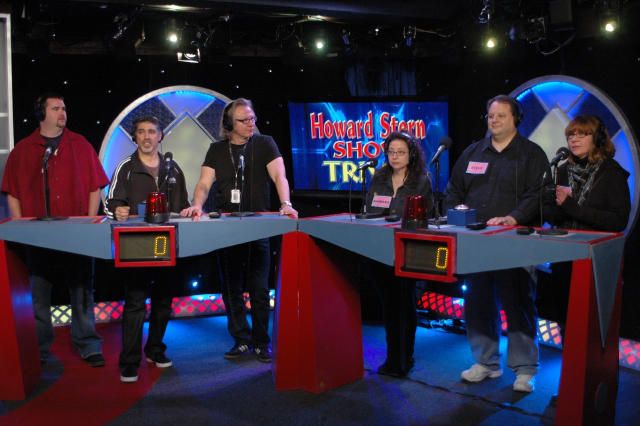 The questions, followed by the winning team’s answer:

For what prize did High Pitch Mike let a transsexual sit on his face? Staff: A 50″ TV. Who originally said ‘Oprah Winfrey, negro woman from the South’? SuperFans: Raymond Norman. During the Scott the Engineer Push-Up Challenge, what was the name of Scott’s trainer? Staff: Radoo. Where did K.C. Armstrong play college football? SuperFans: Western Kentucky University. What state does Gary the Retard live in? SuperFans: Oregon. What urban radio station employed Lisa G before Sirius XM? Staff: Hot 97. During a fight with his wife, Dominic Barbara had what dumped on his head? Staff: A plate of spaghetti.

Robin owns some of what celebrity’s remains? Staff: Vincent Price. What was Howard’s nickname at camp? Gary blew it, guessing ‘Howchie’ before eventually coming up with the right answer: Shades of Blue.

The Staff team was docked 5 points.

What is the name of Riley Martin’s book? SuperFans: ‘The Coming of Tan.’ What does 143 stand for? SuperFans: I love you. Who confused the word ‘marinate’ with ‘serenade’? SuperFans: K.C. Armstrong.