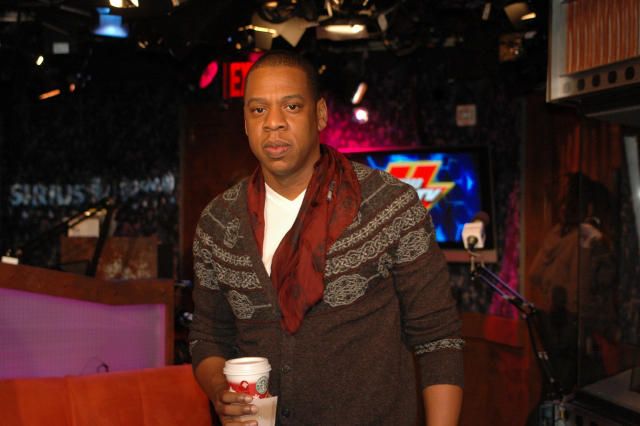 Jay-Z stopped by to promote his new book “Decoded,” and Howard immediately began asking about the rap icon’s lavish lifestyle.

Jay said he lived in a small apartment in Tribeca and wasn’t an “investment” art buyer. “I try to buy things that resonate with me. I have everything from Warhol to Tim Noble and Sue Webster,” he said.

Later, Jay-Z bristled when Howard suggested he had 12 bodyguards. He said he and Beyonce only employ two: “I don’t want people to think we travel with an entourage.”

What Oprah Doesn’t Get

Howard asked about his Oprah interview, so Jay explained that Oprah had difficulty understanding hip-hop: “I knew we came up in different eras. So for her, the n-word has different meaning,” he said. “Our generation, we took that word and turned it into a term of endearment.” Jay said he didn’t support Oprah’s ‘no n-word’ policy: “People give words power…if we take [certain] words off the table, the words just change. Not the attitude.”

He’s Got a Million Therapists

Jay said a lot of his anger came from the time his father left, though he should’ve seen the split coming: “Our house was the party house. We had a huge record collection. There were little hints, like my Mom and my Dad had their names on their records.”

After he was successful, Jay tried to set up a meeting to reconcile their issues, but his father didn’t show up the first time. Jay consoled his mom, telling her: “We’ve seen this movie before.”

Jay added that he did eventually meet up his father, only to have his father die from an illness a few months later. Howard thought Jay’s father would’ve at least shown up to beg for money, but Jay appreciated that part: “[It] made me respect him in an odd way.”

Jay said he’s rarely approached by people from his past who want money, as he has a loyal buffer zone: “My immediate family is so protective.” Any issue or family conflict he has goes right into his art: “I got a million therapists.”

Jay told Howard he turned to rap because he had trouble identifying with popular black musicians like Prince and Michael Jackson: “They were so far removed from who we were everyday…we were telling stories of things that happened yesterday.”

He became the voice of hustlers, those who were “figuring out a way to make good for yourself in the society…anybody who has the drive to make something happen.”

Jay said his success as a drug dealer taught him there was an untapped audience for his music: “I knew there was a generation of kids that went through what I went through that the record companies didn’t understand.”

A hustler’s sense is a sense for business: “I could be Bill Gates. I could be Warren Buffett. What separates us two is opportunity.”

Is He Still Hood?

Howard wondered if Jay still felt “hood” or suffered from a kind of survivor’s guilt, so Jay explained: “I try to stay attached with the culture with everything I do. It’s very difficult, but I know where that comes from…you don’t have to be sitting on a bench in Marcy Projects to represent the culture.”

Jay said his past will always link him with his listeners: “I’m still in touch in with those emotions and feelings.”

Jay told Howard he was a big Barack Obama supporter, in part because of his travels: “I’ve watched the feeling toward America change.”

Beyonce and ‘The Baby’

Howard asked why Jay was so secretive about his private life with Beyonce, so Jay explained: “Everyone knows we’re married. I’d just don’t discuss it because it’s a part of my life that I’d rather keep private. You need part of that. When you’re whole life is played out in front of everybody, you need–for-your sanity–parts that are just yours.”

Jay said he hoped people would leave the topic alone in general: “I really sit back and wonder when people are going to stop.”

Robin Quivers asked if they’d soon be having a child, but Jay just told her to ignore the rumors: “I don’t think Newsday is going to know before my grandmother.”