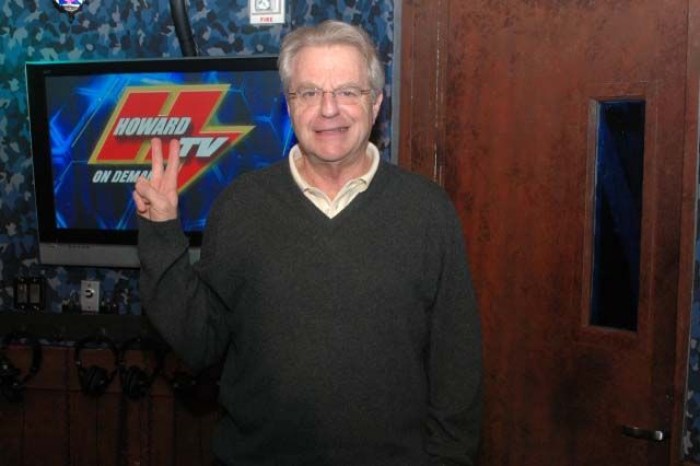 Talk-show legend and former Cincinnati mayor Jerry Springer stopped by the Stern Show to promote his new GSN dating show “Baggage” but didn’t shy away from revealing why he left his judging gig on “America’s Got Talent.”

“It was a combination of things but clearly they wanted to go younger,” he told Howard.

Jerry said he never could have predicted his future, as his primary interest had always been politics. “That was my passion…[but] getting elected Mayor was a fluke,” he said.

War, What Is It Good For?

Howard asked Jerry what he thought of our going to war in Iraq.

Jerry said everyone had it wrong when they said Bush lied about Iraq having weapons of mass destruction. Jerry explained that if you assume Bush believed they did have WMD’s, why on earth would anyone attack a country that possessed WMD’s, especially when they had no idea where they are.

Howard asked if Jerry had amassed–as reported–a $500 million fortune, but Jerry seemed shocked by the number: “Where did that come from?!” Jerry said he didn’t even own part of “The Jerry Springer Show.”

“No. I do very well but I’m not a billionaire,” he clarified.

As well as the show does, it’s not one he himself could imagine watching. “I wouldn’t watch the show but it’s not aimed at me. If I was in college, I would watch it,” he said.

Before he left, Jerry said he was rarely embarrassed by his sometimes wild show. “I know I’m a nice person,” he said.

Still, he regretted being a celebrity. “I love being successful. I hate being known. It’s awful.,” he said.

Jerry said he owed some of his fame to the “unending” chants of “Jerry! Jerry!” which follow him everywhere he goes. “I brought it all on myself,” he concluded.