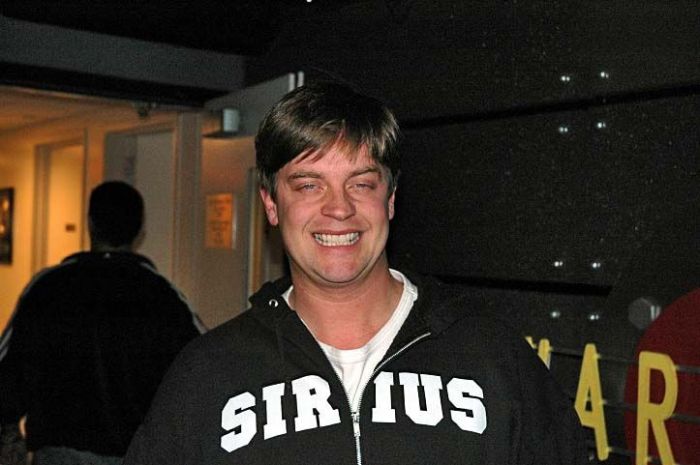 Jim Breuer stopped by to catch up with the crew and told Howard about the time Jack Nicholson first walked onto the “Saturday Night Live” set. The two shared an elevator for a long, awkward ride. “I wanted so badly to say something,” Jim told Howard.

When Jack got off, he turned back, looked at Jim and deadpanned: “You know, you look the way I feel all the time.”

“He thought I was high! And that day, I might have been,” Jim recalled with a laugh.

Lending the Old Man a Hand

Jim said he wanted to get his dad — an 88-year-old guy who often shits himself — laid, as his mom wasn’t putting out anymore: “She’s blind in one eye. She’s not only blind but it droops. She looks like an iguana.”

The old man’s even leveled with Jim: “I gotta get laid.”

When Jim asked if he thought he was still up to the task, his dad winked and whispered: “I still got a tongue.”

Tabitha confirmed: “As long as he’s able and willing? Absolutely.”

Jim passed but thanked Tabitha: “I appreciate the offer.”

Howard asked how Tabitha would be able to shut out the fact that she’s banging an elderly man who shits himself, so Tabitha shrugged: “I don’t have to go to that dark place. I just go. I can just be there.”

An Interesting Call With Mom

Jim Breuer also told Howard about the time he’d tested his mother’s commitment to his dad by pretending—from a phone in the basement—to be an amorous neighbor: “I totally seduced her!”

But she balked when Jim tried to arrange a meet: “She was silent for a while and then she goes, ‘Oh, I’m married.’” When Jim came upstairs later, she was obviously shaken: “She goes, ‘I just had a really crazy phone call.’ And she’s looking out the window, looking for the guy—to see where he lives.”

A caller asked Jim what he felt about President Obama, but Jim dodged the question, dismissing politics in general: “It’s no different than professional wrestling.”

Jim said he was much more invested in his marriage: “Fight, claw, do everything you can to work things out.”

Jim said he recently texted his wife an innocuous message ending with “God has blessed us tremendously.”

She replied: “Yes. He has in every aspect. I love you more than you think. See you tomorrow.”

But Jim’s wife wasn’t done–she promptly followed up: “Slash my last message. Please, please, please stop taking my toothbrush. You know, I don’t ask much from you, but my requests are not being taken seriously and I’m actually hurt and I’m mad that you’d take my request so insensitively. STOP MEANS STOP. Please don’t call me tonight. I’m not kidding anymore. It’s not even about the stupid toothbrush. It’s about not giving a thought and maybe—I’m drop dead serious and I’ve asked you more than 10 times—please stop and think before you act. Goodnight!”