The comedian stops by to promote her new Broadway show, "Kathy Griffin Wants A Tony" 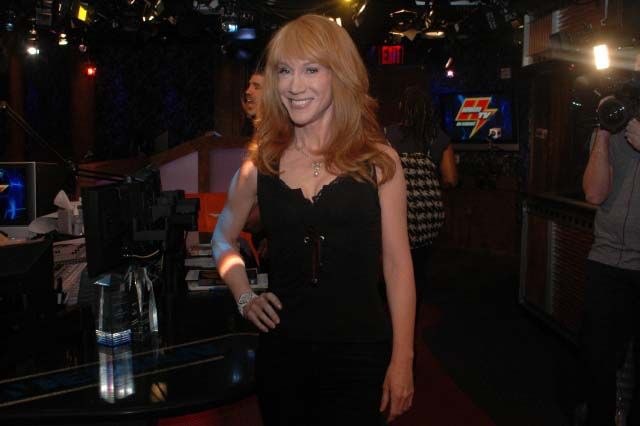 Kathy Griffin stopped by to promote her new Broadway show, “Kathy Griffin Wants a Tony,” and Howard immediately took her to task: “Why did you say to Gary, ‘You guys won’t sell any tickets for me’?”

Kathy said she didn’t think Howard had a big theater-going audience but encouraged Howard to come–when Howard waffled, joking that he wasn’t sure if he’d come opening night or closing night, Kathy told him to send Beth: “She gets me. She’s a good laugher.”

Howard asked if Kathy was really dating Isaiah “The Old Spice Guy” Mustafa, and Kathy nodded, saying Isaiah was something of a rebound: “I came out of a very rough break-up in July … after that, I thought, ‘OK, I’m not going to chase any guys.’”

Kathy claimed that she’s since maintained this casual attitude. “Isaiah just started asking me out … I have no claim on him. He has no claim on me,” she told Howard.

Howard wondered if Kathy has been penetrated by Isaiah’s “Old Spice penis,” and Kathy laughed and then confirmed, “Yes, of course. Yes! We’re dating. Many times.”

But Kathy refused to give any dimensions of her boyfriend’s manhood. “I will say that he’s well-endowed,” Kathy said. “I don’t know the numbers.” Kathy also revealed their relationship started shortly before New Year’s. “All I know is that it’s lovely dating him and I really enjoy it,” she said.

Before she left, Kathy addressed Charlie Sheen’s goddesses, giving them an assignment (“I would really like them to bathe him.”) and some advice: “I would not f’ him as a publicity stunt but I would probably go [with him] to some sort of public event–with security.”

Kathy said she wasn’t afraid any retribution on “Sheen’s Korner,” as she’s used to souring her relationships with celebrities–even her friends/co-stars, like Brooke Shields: “Her quote was, ‘Her loss.’ Which I’ve got to admit was pretty funny…I’ve run into her once and she was very gracious.”