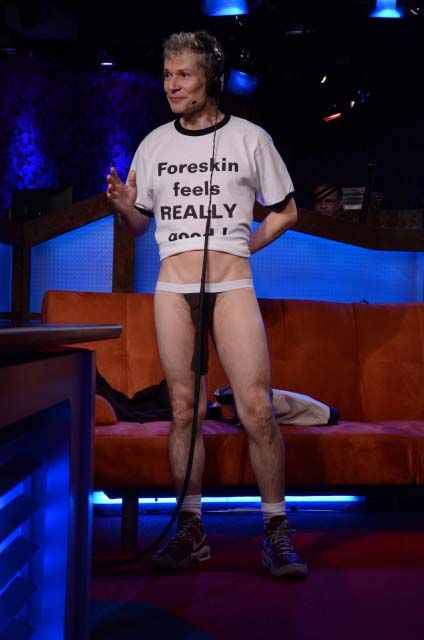 Ron said he started ‘restoring’ his foreskin in 2001 and never looked back: “I’ve gone very few days or hours even without something on my penis…my penis skin is going to be more sensitive by stretching it.” Howard feared that increased sensitivity would cost him precious seconds in the bedroom, but Ron said the opposite was true: “You’re better able to pace yourself during intercourse. It’s more like you feel the effects of having an accelerator pedal instead of an on/off switch.” Ron said he could never actually grow your foreskin back, but could make “what’s left work better.”

Ron then dropped his shorts to show off his wares: “Right now I have a stretching device [on].” Howard just laughed (“You’re a nudnik–you know that?”) but Robin was horrified: “What the heck? Oh my god!” Ron pointed out that he wore special underwear with a small sleeve installed: “I call it a snout.” Howard admitted that Ron was onto something: “It does look like you have a foreskin. A little bit.”