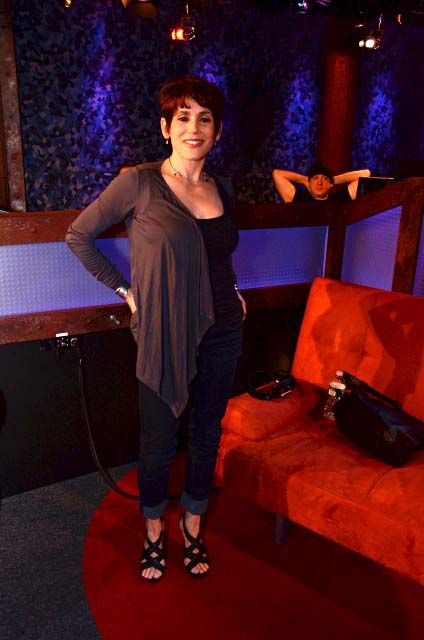 Howard thought that was no way to establish oneself as a success, but Stacey insisted that her life experience was an asset: “Sometimes you have to create your own credentials.”

Stacey said she used to date Woody Allen when she was 17 and was still friends with the director, as he’d treated her as more than just a teen: “I had a head on my shoulders. It wasn’t just about him wanting a young girl with big tits.”

Robin asked what Stacey’s therapists thought: “Do they go along with this story that you had a head on your shoulders?” Stacey shrugged: “I don’t think anything was wrong with it. I really don’t.”

Stacey said she met Woody at a casting: “We talked a lot. And, you know, Woody taught me a lot of things…not [just] in the bedroom but, although, there too.”

Their sex life was ‘not particularly’ kinky, but still adventurous: “Have you heard of one director who has not has threesomes?”

Stacey said the women who joined them in the bedroom were a good time: “We were all in it together and it was very lovely.”

As Howard went through Stacey’s sexual resume–including Larry King, Treat Williams, Tim Matheson and Rolling Stones bass player, Bill Wyman–Stacey shrugged: “I had a lot of fun in LA…I was a little loose, I guess.”

Her kindest words were reserved for Sean Penn (“I liked him a lot but I was not edgy enough for him.”) and Warren Beatty: “Warren was great. He was a great lover. He was a real charmer…he is the most charming human being you’ll ever meet.”