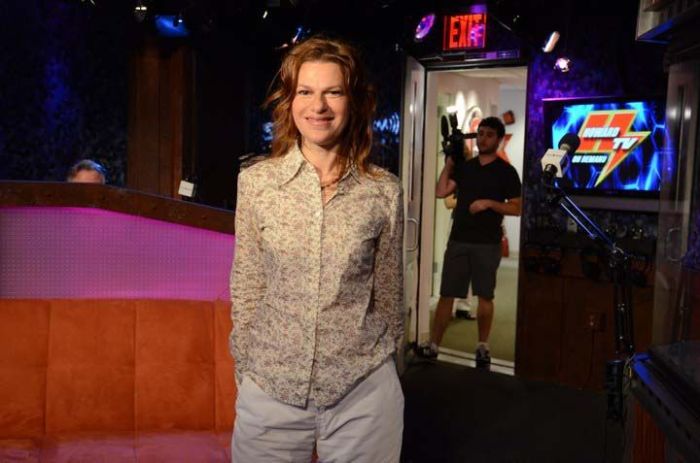 Sandra Bernhard stopped by to promote her new comedy album, “I Love Being Me, Don’t You?” and denied Howard’s theory that her devout Jewish faith conflicted with her cutting sense of humor: “It’s not cynicism…I’m not making fun of people. I think I’m a social critic. Like you.”

Her unique brand of criticism has made her a lot of enemies and even more friends–her birthday yesterday was chock-full of social engagements: “There was no time for sex.”

Sandra said she loved hearing all of Liza’s old Hollywood stories, especially now that she has some of her own: Sandra started filming ‘The King of Comedy’ exactly 30 years ago.

Sandra told how Arnold Schwarzenegger had hit on her on Venice Beach when she first came to LA (30+ years ago): “We just shmoozed and he wandered off. That was it. [But] had I said to him, ‘Yeah, here’s my number. Let’s go out.’

I’m sure he would’ve.” Sandra was similarly dismissive of Jay Leno (“He spanked me.”), saying he’ll never spank her again: “I don’t not like him. I just think he’s a schlub.”

Howard asked if Sandra regretted turning down the role of ‘Janine’ in “Ghostbusters,” so Sandra shrugged:”If I’d been offered the Sigourney Weaver role…”

Sandra added that the film’s director, Ivan Reitman, later approached her to co-write a “sexual hijinks” comedy with Sigourney Weaver and playwright Christopher Durang: “It was an exercise in futility.”