Sports radio host has plenty to say about commuter airplanes and which N.F.L. teams will make the Super Bowl 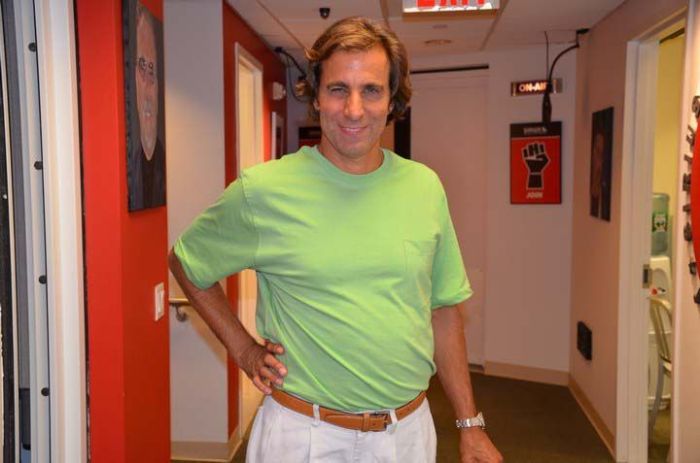 Chris “Mad Dog” Russo stopped by to catch up with Howard and it didn’t take long before he opened up about his most bitter feud with his former partner Mike Francesca.

He said the pair were en route to Indiana in the late 1990s for a Knicks-Pacers playoff basketball game, but their flight was cancelled and Mike balked at the idea of taking a commuter plane. “Mike refused to get on the plane: ‘I’m not going. No first class,'” Chris recalled. “I was upset by that.”

The two then gave each other the silent treatment for quite some time. “I did not speak to Mike until he got married four or five months later,” Chris said.

Asked if he was jealous of Mike’s continued (and Mad Dog-less) success, Chris confessed he was: “They’ve got 22 minutes of commercials an hour. They’re making a ton of money. And here it is, I’m trying to get a couple of calls on Sirius XM. Nobody calls!”

Howard asked if Chris enjoyed running his own channel, so Chris said it was difficult: “Occasionally I get annoyed.”

After the crew discussed the infamous dalliances of Mad Dog’s new morning man, former Mets general manager Steve Phillips, Chris denied that he’d ever strayed himself: “Tempted is one thing. Doing it is another.”

Howard pushed Mad Dog to be more explicit with his descriptions, but Chris shrugged. “I don’t like the vagina word,” he said. “Pleasure Box is not terrible.”

Chris begged for a change of subject. “How ’bout Saints-Packers for god’s sake!” he laughed.

So, Howard asked if Chris thought he’d have to accept less money when his contract was up next year.

Chris hoped not but admitted SiriusXM CEO Mel Karmazin drove a hard bargain. “Mel might love you. He might think you’re the greatest guy. But he’s a businessman,” Russo concluded.

Before he left, Chris picked the Patriots, Jets, Chargers, Eagles, Saints, and Packers as the year’s teams to watch in the N.F.L.

But he disagreed slightly with most pundits’ Packers-Patriots Super Bowl predictions. “I’ll go Packers and the Houston Texans,” he said.

Howard thanked Chris for stopping by but confessed that he understood little of his sports world. “I’m not watching guys in uniforms. I’m watching women,” he laughed.