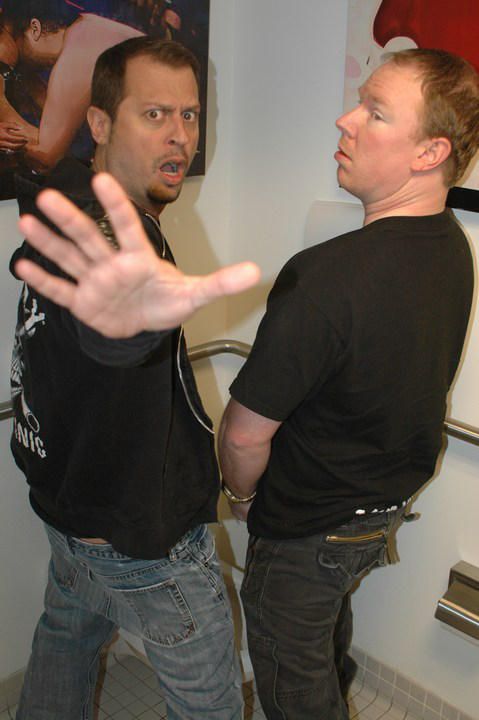 Howard said Richard and Sal wrote him a letter late last week to dispute jokes he’s made about their work ethic: “The two sat back there and wrote a letter together. I guess while they were blowing each other.”

Richard came in to explain the letter’s provenance: “We were really bummed out about what you said the other day. It probably took 20-30 minutes.”

Sal rushed in to add that it didn’t interfere with work: “During our lunch hour.” Howard thought the pair were full of it: “I guarantee there were hours put into this stupid letter. You know what I did? I read about two sentences and I went, ‘This is the most boring horseshit I ever read’…you don’t have to tell me how hard you work.”

Howard asked who dreamed up the idea, but Sal refused to say: “I think it was pretty mutual.”

Howard knew better: “You don’t think as one. You’re not the Borg.”

Howard demanded that Richard or Sal read the letter aloud , so Richard obliged: “Howard, we would like to reassure you that we are using our time very wisely and working hard to create material for the show. Many of our calls and bits sometimes take up to a month to execute and edit a final call for the air. The broken vase Tradio call took one full week’s worth of attempts before we were finally able to get through enough times to put together the final call. Punctuated by Howard’s laughter,

Richard continued: “Below is a small example of some of the material we have presented and show submissions that we have edited within the past month. We work very hard to put out finalized product for the show and want to make you aware of this. The reason our studio door is often closed is because we are recording or writing to create material for the show and do not want people walking in when we are trying to record a call, song or bit.” Richard concluded: “We feel that we are working harder than ever to write, edit, produce and record material for the show and just want to make you aware of some of the work we’ve done recently.” Richard said they’d then attached a 3-page list of their recent efforts. Howard said he never wanted to receive another letter from Richard or Sal: “Write me a letter about how you shouldn’t write letters so I know you understood this.”