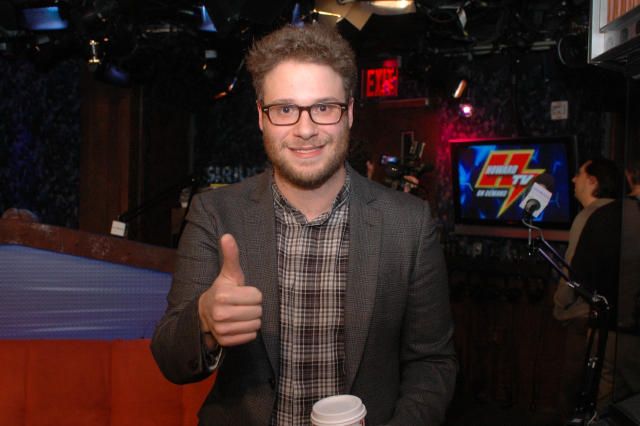 Funnyman Seth Rogen returned to the Stern Show on Monday morning and right off the bat Howard jumped at the chance to discuss James Franco. Seth reported he and James were making another movie together but it’s not a “Pineapple Express” sequel.

Seth also shared that he and Franco talked often, even during last year’s Academy Awards prep. “I was in communication throughout the whole thing with him. And he saw a bad thing coming before it happened,” Seth told Howard. “It was a lot of, like, ‘I hope it comes together’… and then it was like, ‘It’s not coming together.'”

Howard was curious if marriage had changed Seth and his wife’s relationship at all.

“Not really. I feel like it’s better in a way because she’s happy that we’re married instead of constantly pissed off that we’re not married,” Seth told him with a laugh.

Asked if there was any pressure to take the next step and start a family, Seth said, “There isn’t, actually. No. It is nice. [But] I’m wondering how long it can last. I’m riding it out while I can.”

Since his wife also writes, the two often battle for material. “There has been, actually, some proprietary arguments over moments in our relationship, I would say, who gets them for their movies,” Seth said. One such argument came on their wedding night. “We tried, I think, to knock one out,” Seth said of he and his wife’s attempt to have sex for the first time as husband and wife. “Just to say we did. But I don’t think it was the best we’ve ever done.” He also admitted to walking down the aisle stoned. “I started to get anxiety. Like, it was one of, actually, the only times that weed has really f’ed with me,” Seth told Howard.