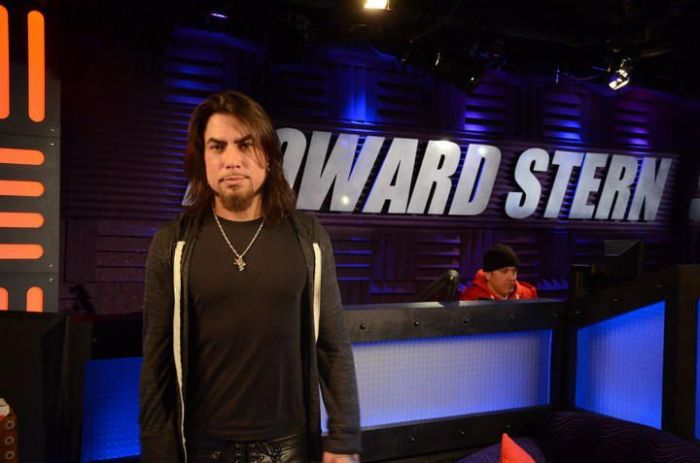 Dave Navarro stopped by to promote his new show, “Ink Master,” and bemoaned how Jane’s Addiction performances–and their audiences–have changed in the last ten years: “You’re just looking at people looking at their phones…they’re either recording or taking pictures.” Dave said people used to hold up lighters during the slow jams, but now they just raise their glowing phone screens: “It’s futuristic but it’s a little off-putting.”

Carmen Electra is a “Regular Girl?”

Howard was more interested in Dave’s off-stage exploits: “You still banging all the porn stars?” Dave laughed that he was: “To be perfectly frank, I’ve had more turbulent times with straight-up, regular girls.” Asked if he counted Carmen Electra as one of those turbulent regular girls, Dave shook his head: “Talked to her recently. We’re all good, old friends, like nothing ever happened.” Dave confessed that his reputation was well-earned: “I like to pick up and go. I like to tour. I like to have my own space in my apartment…and that kind of parlays into my relationships.” He doesn’t see himself settling down anytime soon: “All the things I was told were phases–music, tattoos, girls–all the things I was told that would wear off, have never worn off.”

Howard said he’d heard Dave had success meeting girls on Twitter, but Dave refused to detail his best experience: “I can’t get into that. It’s too good.” Without saying who she was, Dave described their encounter like this: “Hey, what are you doing? Nothing. Wanna come over? Sure. 15 minutes, over. Hour later, out.” Dave said Howard would recognize the girl, a somehow well-known blonde: “I believe I hit the Twitter lottery. Daytime ten. Daytime, noon, in the sun, walking-down-the-street ten. A nighttime fifteen.” With an attitude to match: “After we got done with everything, she got up and left and I honestly felt a little used.”