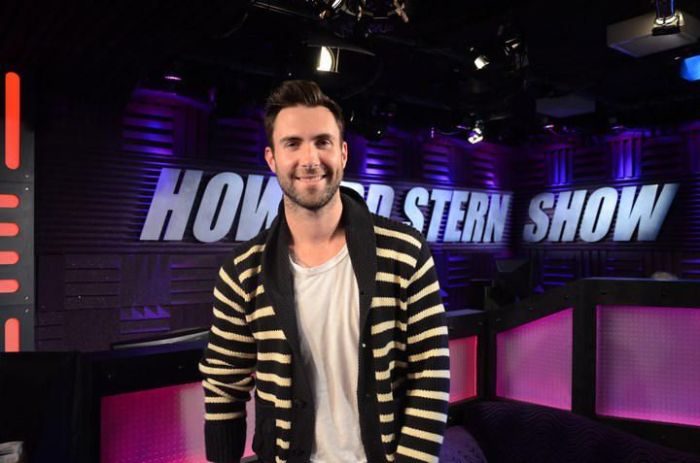 Maroon 5 vocalist Adam Levine stopped by to promote the current season of “The Voice,” although Robin was far more interested in his behind, exclaiming, “He’s gorgeous! Look at that ass!” Asked about Maroon 5’s remarkable chart tenure, Adam said it was different than being a rock star in the ’60s and ’70s.

“If you were a mid-level band, you definitely had a plane,” he told Howard. But the lack of excess in the current industry is almost an advantage now since that allows Maroon 5 more control.

Adam said he thought of partnering with Christina Aguilera after writing “with 500 other people” on Maroon 5’s latest hit, “Moves Like Jagger.”

“[It] definitely needed a female voice,” Adam said of the hit song. The partnership coincided with their gigs on “The Voice” and it wound up becoming the show’s theme. Howard wondered if it bothered Adam that the producers of “The Voice” paid Christina more, but Adam shook his head, since Christina’s name helped launch the show.

“I was totally fine with that,” he said.

On His ‘Voice’ Co-Coaches

Adam later acknowledged some conflict he and Christina had when “The Voice” first started.

“In the beginning she was [showing up] late, but then she stopped doing it,” Adam told Howard. “She and I had a thing in the beginning where it was a little … we bickered. But it’s done and we’re cool.” Adam also gets along great with fellow “Voice” coach Blake Shelton, who often sends “pictures of stuff he kills” and had Adam over to visit his property recently.

“He lives in like this metal shack,” Adam explained. “He’s got tons of dough but he keeps it so real.” Asked to explain what he meant by shack, Adam clarified: “A 3,000 square foot shack…with an overwhelming amounts of deer heads.”