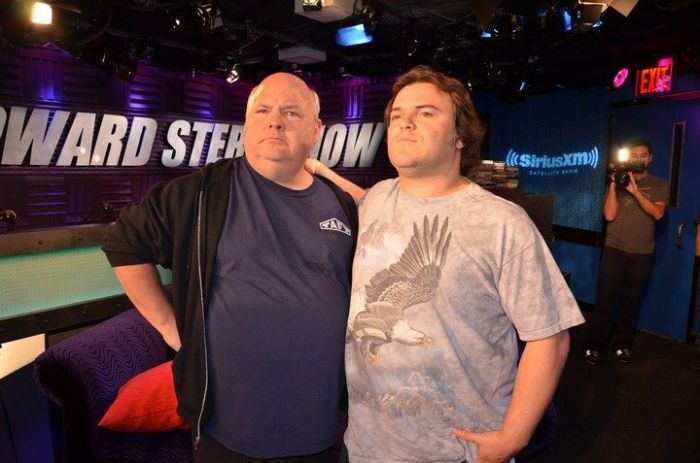 Jack Black stopped by with Kyle Gass to promote the new Tenacious D album, ‘Rize of the Fenix,’ and immediately had to answer for his expanding waistline: “I am very fat right now. I really am trying. I’m just very hungry.” Absent was the D’s new (unofficial) member: Dave Grohl: “He’s the best drummer alive. He’s on every track. … How do we pay him? We take care of him, but it’s mostly charity work for him.”

How Failure Fueled the D

After telling a story about joining his hero, “Don’t Worry Be Happy” singer Bobby McFerrin, on stage and shaming himself (“I started doing the chest slap and it was unauthorized.”), Jack said the failure of the Tenacious D movie was no different: “Being a comedian, those embarrassing moments are what makes you stronger, [but] I felt pretty confident that it was going to be a hit. I was shocked. I was stumped. I felt like America had dumped me.” Kyle said it was hard on him as well, as he doesn’t have a film career like Jack’s: “I started to resent the whole thing. … I started a lot of side projects to try to [diversify] but then I realized Jack was my meal ticket.” Jack said they’d taken inspiration from other musical comedy acts like Lonely Island and Flight of the Conchords: “We had to take it up a notch. The only way we could compete with them was to take it more seriously.”

JD Harmeyer and His Mouthful of Pretzels Is Upset With Kimmel