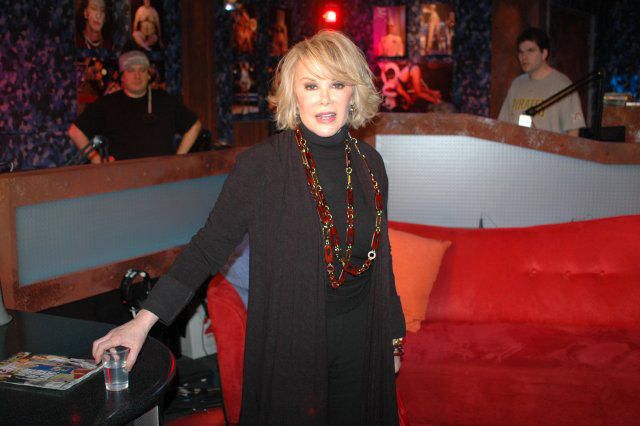 Joan Rivers stopped by to promote her new book, “I Hate Everyone … Starting With Me” and hopelessly scanned the studio for Robin. “That bitch has lost so much weight,” Joan joked.

When asked her age, Joan fessed up to Howard that she’s now 79 years old. “I’m in perfect health. That’s the joke. And everyone around me is dropping dead,” Joan said. In addition to being healthy, Joan remains confident. “I think I’m the best stand-up alive,” she told Howard.

Joan revealed how the E! network asked her to stop saying negative things about Chelsea Handler. “They told both of us. And I think that was really smart,” Joan told Howard. “They said, ‘Please stop it.’ They’re lovely at E!” Later, at the network’s upfronts, Chelsea paid Joan some respect which Ms. Rivers appreciated. “She said something very nice about me at the podium … E! wants it to look like we’re a happy family. I don’t need another feud.” 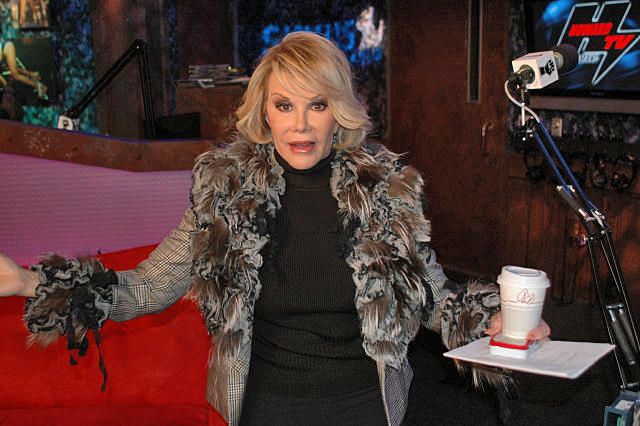 Joan said she’d recently begun smoking pot but couldn’t get her daughter, Melissa, to join her. “She’s wrong. I think we’d have a good time,” Joan said. It only take a few puffs to get Joan high, however. “It didn’t take that much because I hadn’t done it in 40 years,” she explained. “I just laugh and laugh and laugh. Everything strikes me as funny.”

Her Night With Robert Mitchum

Howard asked Joan about reports that she’d once slept with Robert Mitchum which triggered a visible response from her. “You don’t light up like this when I mention Edgar!” Howard told her.

Joan shrugged and said: “Well, Edgar I was married to. Robert Mitchum was a one-night stand.”