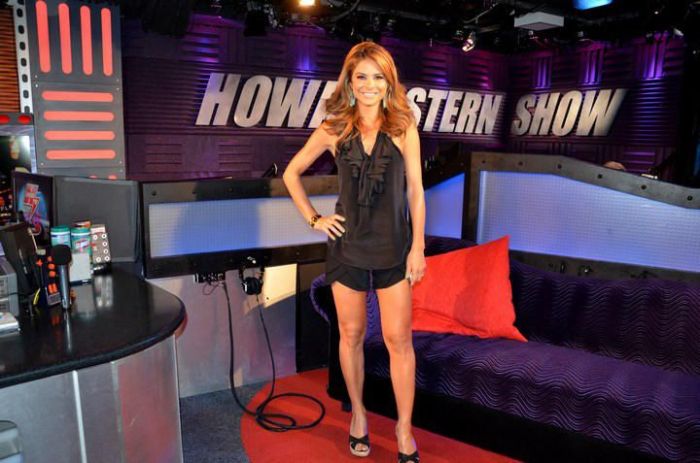 Maria Menounos stopped by to talk about her recent stint on ‘Dancing With The Stars,’ but Howard was more interested in her body issues. Maria said they stemmed from a handsy doctor she had in LA: “I’ve had some issues with doctors. I mean, they’ve been violating.” She apologized for giggling about such a serious issue, claiming it was a nervous response: “I was almost kidnapped once and I was literally laughing.”

One Little Malfunction and ‘It’s On’

Howard pressed for more, citing the bikini she “reluctantly” wore in Times Square after losing a Super Bowl bet: “You come off crazy! ‘I’m so embarrassed I’m in a bikini!’ You have a gorgeous body. Of course you want to show it off. … You always make sure there’s a photo opportunity when [you’re] in your bathing suit.” Maria denied tipping off the paparazzi–they just happened to catch a wardrobe malfunction once in Miami Beach: “So now, everytime I go to Miami, it’s on.” After being tipped off by airport employees, as many as 30-40 paparazzi head to the city’s beaches and wait, cameras ready: “So you walk out of the water and they’re like, ‘If you just pose we’ll leave you alone.’ And I’m like, what am I gonna do? So I literally–I’m just like, ‘Ok.’ I stand there for a minute and I’m like, ‘Ok? Goodbye,’ and I walk to my seat. It’s embarrassing.” And the picture always, it seems, sells to a tabloid.

Howard asked why ‘Dancing with the Stars’ producers never showed Maria’s boyfriend, Kevin Undergaro, in the show’s pre-roll package, but Maria wasn’t sure: “I don’t know. It’s funny. In the beginning, they wouldn’t even show him on camera.” At Howard’s request, Kevin came in to comment on the on-camera kiss Maria infamously shared with her partner, ‘Dancing with the Stars’ pro Derek Hough: “I don’t feel a line was crossed, and if she did, I don’t want to know.” Kevin denied that there’d been any infidelity–or rather, he hoped: “This was the only time I wondered…but I don’t want to know. I just don’t want to know.” Kevin said Maria actually still hangs, talks and texts with Derek, joking: “When I was inside you last night, were you thinking about Derek?” To prove her innocence, Maria allowed Howard a peek at some of her text messages–but quickly pulled her phone away: “She won’t even let me see!”

Maria in the Bedroom 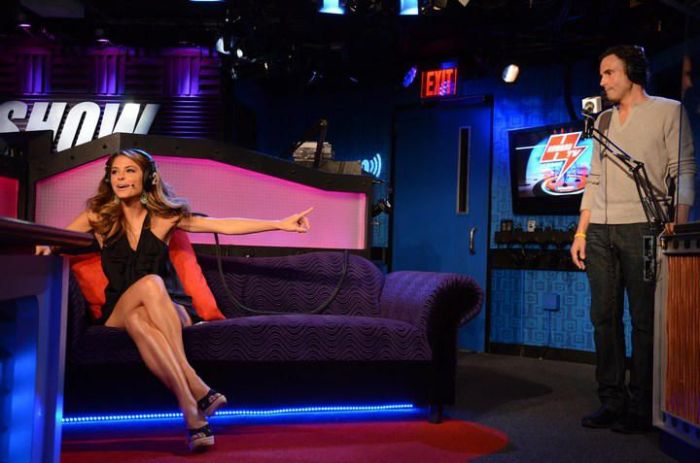