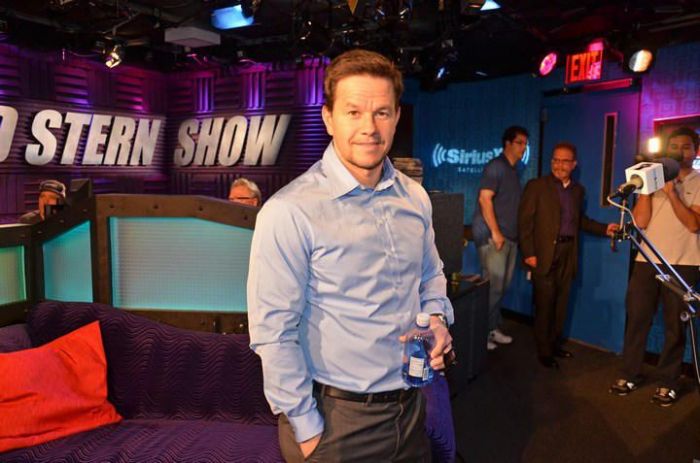 Mark Wahlberg stopped by to promote his new film, ‘Ted’, and told Howard that his wild days were behind him: “We’ve been to counseling here and there but I’m married to one of the most beautiful women in the world, so, you know, it doesn’t get any better than that. … I’m very lucky and very fortunate.” Mark now goes to church every day: “I didn’t get to go before the show, but I’ll definitely have to go after.” As part of his reformation, Mark plans to finally complete his high school education: “I’m going back. Starting next week. I’m doing it online.” Mark said he’d started smoking cigarettes in the house at 12, eventually dropping out of school in the 9th grade to work at a grocery store bagging groceries: “I always was a hustler.”

Asked how he chooses his projects, Mark said he had a whole team in place to help him out: “There’s a few of us who make decisions based on a pretty simple formula, you know. I want to do something different every time out. I want to go more into comedy. We do the action, we do the drama, and we go with our gut–what seems real. What I think people want to see me in.” Mark said his team keeps him very informed–he already knows ‘Ted’ will perform well: “I know the tracking before the tracking comes out. Of course. I’m a businessman, Howard.” His acumen extends beyond entertainment–his latest successes include Marked, a nutritional supplement line at GNC (“It’ll be as lucrative as anything I’ve ever done.”), and Wahlburger: “I was dead set against the idea. … but he’s a five-star chef, my brother (former New Kid on the Block, Donny).”

His Best…And His Worst

Asked to name his best work, Mark cited ‘Boogie Nights’, ‘The Fighter’ and, as a comedy, ‘Ted.’ Among his biggest disappointments were ‘Planet of the Apes’ (still, fun to make), M. Night Shyamalan’s ‘The Happening’ (“Where nothing actually happened.”) and ‘The Truth About Charlie’, an $80 million remake of ‘Charade’, that, for whatever reason, the studio marketed as an independent film. But with more ups than downs, Mark can afford to look ahead: “I definitely have an exit strategy. It’s more like a number.”