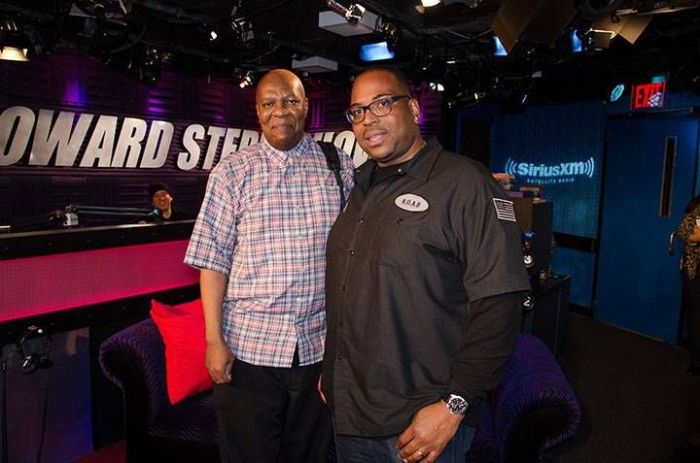 King of All Blacks and Big Black stopped by to promote the return of their Howard101 show, ‘Black On Black’ (tonight at 7pm EST), Big Black was happy for the opportunity: “I don’t leave my apartment unless I’m doing something for your channels.” Asked how he gets laid, if he never leaves his apartment, Big Black said he hadn’t gotten laid since the 80s: “I used to do pot every day back in college. I think it affected my ambition.” Similarly, Big Black has no desire to work. He lives on a meager government stipend (“I had a can of Vienna sausages. … all I need is a $100 a week.”) coupled with the cash he’s paid for occasional episodes of ‘Black On Black.’ As King busted on a laundry list of Big Black’s trifling habits, Big Black struck back that King had a creepy interest in his teenage niece. King shrugged: “If she can bleed, she can be butchered.” (To which Robin moaned in disagreement.)

Who Is the Blackest Black?

Howard then quizzed the ‘Black On Black’ duo on black culture–the first to three would take home the title of Blackest Black. The questions, followed by the pair’s answers: Lil Wayne is a proud member of what street gang? Big Black guess Crips, but Wayne is a Blood. How many times has 50 Cent been shot? King guessed 7–incorrect. 50’s been shot 9 times. What was the name of JJ’s sister on ‘Good Times’? Big Black knew it was Thelma. Give the government name of one Run-DMC member. King knew DMC’s first name was Darryl, but that wasn’t good enough. Big Black then stole the point, listing not just Darryl McDaniels but also Joseph Simmons (aka ‘Run’). Who composed the ‘Shaft’ soundtrack? King guessed Quincy Jones, so Big Black stole another point–and the title of Biggest Black–by naming Isaac Hayes.