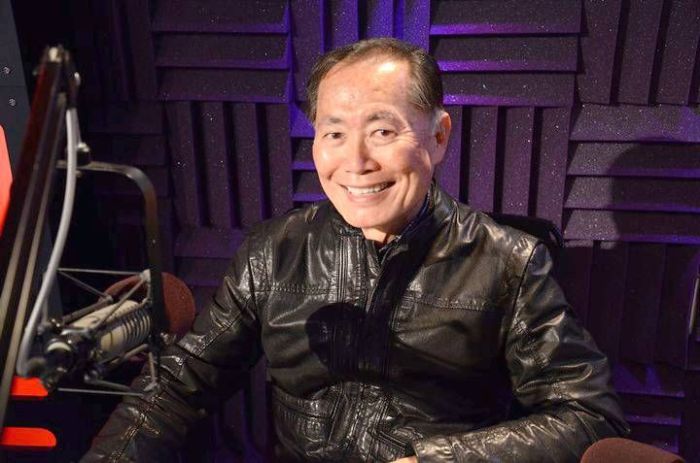 Early in the show, George Takei–sitting in as the show’s announcer this week–told Howard about his recent appearance in the pages of Archie Comics: “It could not have existed when I was a young man. It reflects the diversity of American society. It reflects, you know, out gay young people idolizing an older gay Asian actor. It’s commentary on how far we’ve come.”

Howard moaned that George was putting him to sleep faster than ‘Lincoln’, a concept George didn’t understand: “How can you sleep through that?!” Howard looked to Robin for help: “We both did. Robin and I finally slept together. It was at ‘Lincoln.'” George predicted that ‘Lincoln’ would win “the Oscar” (he didn’t say which), an honor Howard hoped would instead go to ‘The Sessions’ star John Hawkes: “Did you watch that? Much better than ‘Lincoln.'”

The Takeis In the Bedroom

Asked for an update on his sex life, George said he and Brad had fallen back into old habits, eschewing a promised 2-nights-a-week schedule. Just like old times, they only have sex Sundays. George lamented :”I take my shower. I come out of the shower, dried, nude, and Brad’s there, nude…it’s become pretty much routine.”

Then the couple wrestles on the bed (“I like to let it prolong, go on and on–lots of foreplay.”) until, eventually, one of them begins to blow the other: “It’s gotten pretty choreographed. [But] I try to change it regularly.” George admitted that he was at fault as well–at 75, he can’t give it to Brad (or vice versa) multiple times: “When we were young, it was much more spontaneous.”