Tiki Barber By the Hour 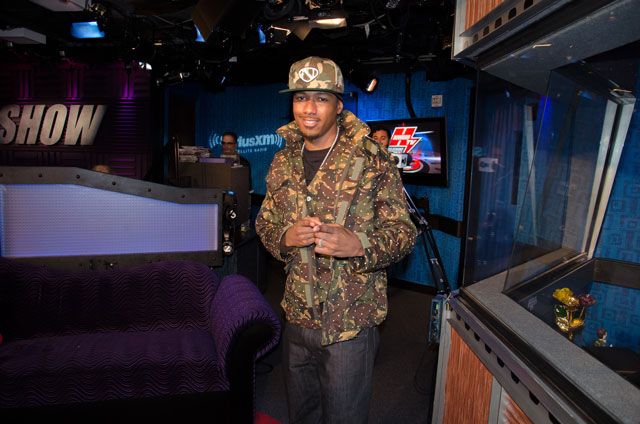 AGT host Nick Cannon stopped by to discuss the show’s upcoming season, saying he’d made some changes since being hospitalized for exhaustion–like quitting his morning radio show: “My health is great. I quit the morning portion because I wasn’t getting any sleep.” He’s content with a weekly Top 40 countdown: “I’m coming for Ryan Seacrest. All of that. My countdown show is better than his.”

Nick said he didn’t understand why ‘American Idol’ producers had hired Mariah as a judge–only to hire Nicki Minaj as well: “It’s like they had filet mignon and doused it in ketchup. … She feels a lot of people led her the wrong way, but I think she’s going to make the best of it.”

Howard wondered why Nick had rallied to Chris Brown’s side after Chris beat up Rihanna, Nick said he just saw a friend in need: “He’s not a monster. He’s a young man who needed help at the time, and he was searching for someone.” The ridiculous part–to Nick–was the bowtie Chris wore on Larry King Live to publicly apologize: “That’s ridiculous. He’s got neck tattoos and a bowtie?”

On Kim, Katt, and Cher

On dating Kim Kardashian–until her sex tape came out: “She told me there was no tape. If she might have been honest with me? … I still think she might have had a part to play in it[s release].” On comedian Katt Williams’ recent meltdown: “I actually don’t think it’s drugs. I call it access to excess…power or whatever.” On his pick for Sharon Osbourne’s AGT replacement: “Someone like Madonna. Cher would be a good one.”