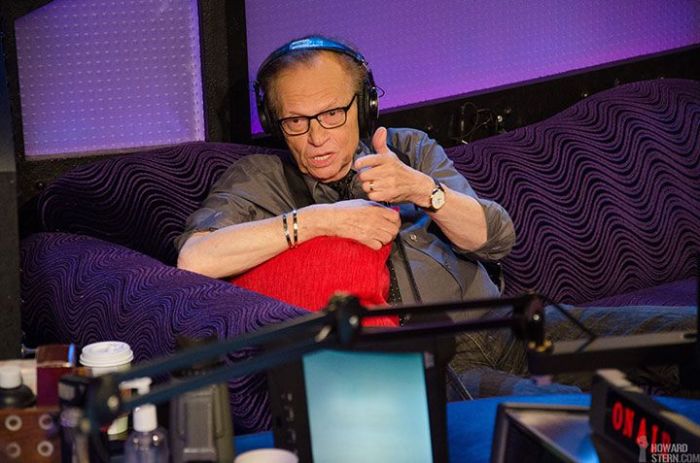 Larry King has counted among his friends the likes of Don Rickles, Mel Brooks, and Lenny Bruce. He cracked Howard up with his stories about hanging out with some of the great comedic minds of all time.

Larry broadcasted from the 1964 World’s Fair in Queens, and his guest was the young comic and writer Mel Brooks.

Larry loved Brooks’ classic character the 2,000 Year Old Man, so he addressed Mel as the character during the show. Without skipping a beat, Mel answered every question both effortlessly and hilariously, discussing the first ever World’s Fair with Moses parting the Red Sea and an enterprising agent who once promised “keep it up and I’ll get you ten pages in the Old Testiment.”

Larry’s friendship with Don Rickles continues to this day. Larry was once in the audience of a Rickles show in the old days, one where legendary Oscar winner Sydney Poitier walked in late and sat by Larry. Always controversial (but never mean-spirited), Rickles looked down at Larry and said, “You’ll hang around with anything.” Directing his follow up joke directly at Poitier, he continued: “You won’t like it here. They don’t have chicken or watermelon.”

Lenny Bruce was another comedic genius who Larry called a friend. Lenny once even gave Larry advice on cheating (not that Larry needed it or anything).

Lenny said if you’re stepping out with a girl, take her to the lobby of a huge hotel and announce that you’re going to bed with her; introduce her to everyone, say hello. Everybody will think you’re joking. But if you try sneaking her into a little seedy motel, suddenly the girl at the front desk is your wife’s cousin.