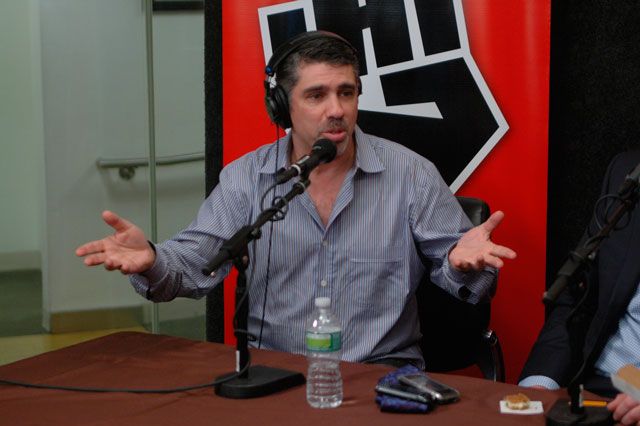 Stern Show producer Gary Dell’Abate was on last week’s Wrap Up Show talking about how Howard has no patience for people who don’t think like he does.

Howard pointed out that this was in reaction to him saying that he doesn’t respect people who don’t write things down. Also, Howard went on, today’s world revolves around a computer, and if you don’t know how to type, if you “hunt and peck,” you’re in the wrong. This was obviously aimed at Gary, since his hunt and peck method has been goofed on many times before.

Gary admitted that he still doesn’t know how to type, but he does fine. Howard said he learned to type in high school, and if he hadn’t, he’d be taking a typing class to learn. “You’re a f*cking moron if you don’t.” Howard has no respect for hunt-and-peckers.

Gary felt that not sticking to the home keys hasn’t held him back, but Howard pointed out that producer Jason Kaplan has to type a lot of stuff for Gary. “It’s like you’re not even a man.”

Gary show back that if he should force himself to type because it’s important and enjoyable, Howard should read a book, which he claims he hates doing.

Howard made Gary recite the home keys, and Gary said that this exact rant is what he was talking about on the Wrap Up Show – Howard only likes people who are like him.

Howard still protested, but Gary pointed out that a chapter in Private Parts called “If You’re Not Like Me, I Probably Hate You.”

Howard said that was a joke. He’s dead serious about the typing, though.