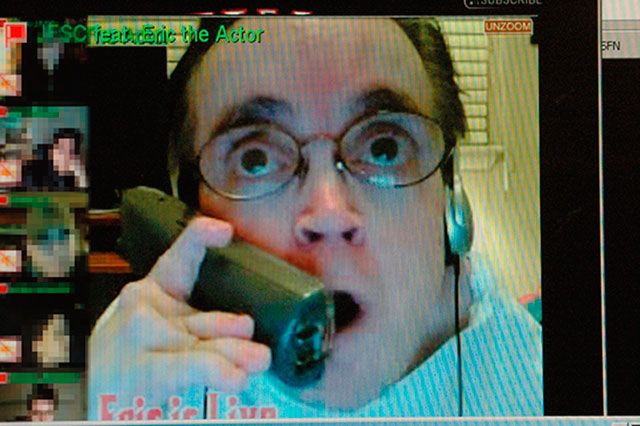 He may have stopped Tweeting publicly, but there is so much gold to mine in Eric the Actor’s Twitter account that it should keep up going for years to come.

A listener named Gonzo called in this morning and alerted us that in addition to his entertaining tweets, it’s also funny to look at who and what he follows on Twitter.

Maybe even more curious than following a she-male was Eric following standard restaurant chains like Olive Garden, Cinnabon, Baskin Robbins, and IHOP. Eric enjoys eating at these places, but gave no real reason for following them on Twitter – they don’t even tweet out coupons or anything valuable.

When pressed over and over as to why he follows the Twitter feeds of foodstuffs like Kit Kat, Oreos, and Pillsbury, the midget was equally tight-lipped, and it seemed like we hit a nerve when we questioned the little guy’s devotion to these fatty, sugary foods and mid-level restaurants.

Of course, no Eric the Actor discussion is complete without Howard reading a few of his best Tweets to Robin, and this was no exception.

LOOK DUMB F*CK I AM NEITHER A JEWISH PERSON NOR AM I A F*CKING STALKER. I HAVE NEVER TAKEN A SHIT ON ANY LAWN AT ALL.

MY LIFE DOES NOT SUCK YOU DUMB F*CK. I AM NOT FAT, AND I AM NOT DRINKING MYSELF TO DEATH WITH PEPSI DIP SHIT

SHUT THE F*CK UP YOU PATHETIC DUMB F*CK I AM NOT GOING TO F*CKING MENTOR ANYONE ABOUT THEIR DICKS. F*CK OFF DIP SHIT F*CKER.

DUMB F*CK FOR STARTERS I DO NOT LOOK LIKE A TURKEY NOR DO I LOOK LIKE A CRAB, OR REALLY ANY OTHER ANIMAL FOR THAT MATTER.