As we kicked off another week of shows, Howard had a lot on his mind and a lot to get to. So let’s get to it.

– Robin saw a trailer for “I, Frankenstein” and couldn’t believe that Frankenstein was good-looking.

– A girl refused to compete in a race she’d trained months for because she wouldn’t wear the number ‘666.’

– Tan Mom filed for a divorce from her husband, because he ‘harasses’ her and is always in her face. He was subjected to a lie detector test and, while it didn’t show that he’d had intercourse with anyone but Tan, he did admit to “touching the private areas” of strippers. This of course leaves the door open for the much rumored Sal the Stockbroker/Tan Mom affair. 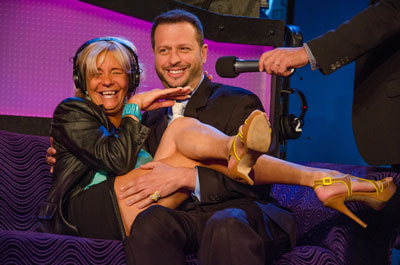 – Howard has become obsessed with how men carry their wallets, and he tried to order a new money clip over the weekend, but it took him an hour to order it and it was out of stock anyway. He decided he wanted a money clip when he asked Jerry Seinfeld – while they were filming Comedians in Cars Getting Coffee – what kind of wallet he had.

– “Mitt Romney” called up to good on Barack Obama and the ObamaCare website fiasco. He laughed that they didn’t even cover Viagra, he gloated that he has fathered only sons, while Barack and Michele have two girls, and theorized that if Hillary Clinton is elected president, Bill will be in the bedroom making love to “hookers, Pam Anderson and a goat.” He signed off with “F*ck Obama, f*ck Syria and f*ck Jackie!”

– Howard read about this insane traffic stop where a man was accused of “clenching” his ass cheeks and had his anus probed and enemas delivered and colonoscopies forced, all for nothing. Howard was reminded of the time his mom took his temperature rectally.

– Robin can’t recommend “12 Years a Slave” enough, even though Brad Pitt produced and acted in it. Robin has repeatedly said she does not consider Brad a ‘movie star’ and noted that he gave himself the role of the nicest white man ever in 12 Years.

– Howard read an article about car manufacturers putting a stop to installing AM/FM radios in cars and took it as a compliment that radio stations – and now radio as a whole- fall apart without him.