Lady Gaga Talks Her Family, Her Fortune, and Feuding With Famous People

Lady Gaga Talks Her Family, Her Fortune, and Feuding With Famous People

"It's 'Oh, you're amazing' and then the hand goes up the leg," the pop star told Howard about her early meetings with music producers 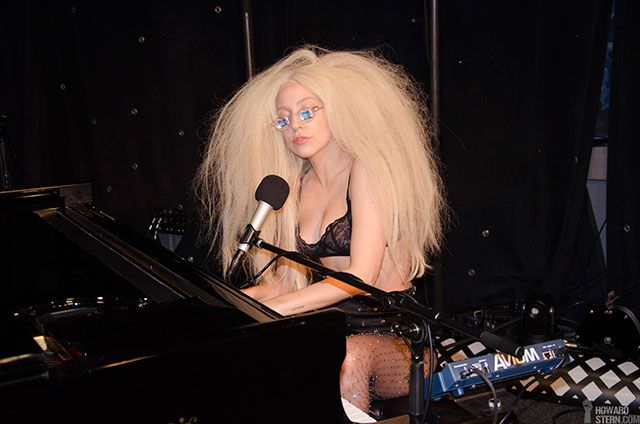 International pop sensation Lady Gaga stopped by this morning to promote her new album ARTPOP. She opened up her appearance with a heartfelt “Hello World!” and then sat down for a conversation with the King of All Media.

There was so much to cover that the interview and performance lasted two hours, and the Lady talked, sang, and played her heart out. Here are some of the highlight’s from Gaga’s visit:

LADY GAGA TALKS ABOUT HER BEGINNINGS

Lady Gaga famously grew up on the Upper West Side and moved down to the Lower East Side, where she struck it big.

The beginning wasn’t easy – lecherous record executives fill young performers’ head’s with ideas. “There are so many young girls who want to be recording artists and I want to make sure they understand that they’re walking into a lion’s den. It’s ‘Oh, you’re amazing’ and then the hand goes up the leg.”

Gaga says those guys were her first experiences with adults, and it has affected her life ever since – “I’ve had drug and drinking problems ever since.”

Super-producer L.A. Reid (who was not one of those creepy record executives) singed Lady Gaga on the spot. Later on, after listening to her demos, though, he dropped her and has regretted it ever since.

She wrote many songs for other artists, including the Pussycat Dolls and Britney Spears, but she grew tired of writing for “prettier girls,” and after “Bad Romance” became a huge hit, she was allowed to keep her songs for herself.

Howard immediately thought that Gaga’s penchant for wild outfits and costume changes must mean she’s a great lover in the bedroom – surely she dresses up and plays characters for her man.

She admitted she does enjoy it, but it’s been a challenge in the past to find a guy who will put up with it in real life – the idea is appealing, but the reality of changing outfits becomes a drag.

Gaga is still with her boyfriend, Taylor, despite stories that they split. She said they have a pretty healthy relationship. He’s an actor on Chicago Fire and let’s Gaga do her thing and they’re happy and monogamous.

She was impressed that Taylor came onto her ‘like a lesbian’ – without any nervousness or cheesy pick-up lines. Speaking of lesbians, Gaga said she wouldn’t be with someone else while she’s in a relationship, but she is into women. The idea of bringing another woman into the bedroom is fun, but probably not the best idea.

While she shrugged off the idea of marrying her boyfriend for now, she revealed her dream wedding – just heading to David’s Bridal with a bunch of friends, getting drunk, finding the worst clothes they could and heading to the courthouse.

Howard asked Gaga about her famous feuds with Madonna, Perez Hilton, and Kelly Osbourne, and Lady Gaga said all the feuds are “rooted in Madonna.”

Gaga felt that for a long time, all the talk about her was “Is she the new Madonna? Will she outlast her?” and it was unfair. People acted as if Lady Gaga was eying Madonna’s throne, but, as she put it “I don’t want your fucking throne.”

As for her feud with the Queen of Pop, Gaga thinks that it’s true that Madonna doesn’t like her, but she’s “more aggravated that I’m not upset that she doesn’t like me.”

Perez Hilton was a little deeper and a little more painful. Perez had been an early supporter of Lady Gaga, writing about her on his popular website when was she was virtually unknown. The two grew close and Gaga admired Perez’s statements that he wanted to change from his controversial beginnings and become nicer and less of a bully.

Gaga agreed to sit with Perez for a two-day interview for a TV show he was working on and, in the middle, she felt he turned on her. He started asking “terrible” questions and putting down her album Born This Way, alluding to Gaga being a failure.

She felt betrayed and didn’t take too kindly to it. She stopped hanging out with him and credits that with his vicious treatment of her ever since.

She even claimed that Hilton tried to move into her apartment, and she felt it was a huge invasion. Gaga admittedly “went crazy” on Twitter, and accused Hilton of “stalking” her. He swore he wasn’t, but she said he put bids on two different apartments in her building the next day.

While she isn’t in a feud with any young pop stars, she is disappointed by some of their outrageous antics, like Miley Cyrus smoking a joint onstage. She’s not offended by the shock-value, she’s upset that there’s no message attached to the stunt. It’s more attention-grabbing than making a statement.

Gaga did drugs in her struggling days, but she also got into them pretty heavily in the past two years. She claimed that, thought she’d become an enormous star, the business left her depressed and she was “filling the void with cocaine, LSD and everything. You name it, I’ve tried it.”

Her marijuana habit took over after a hip injury caused her to swell up and cancel the last chunk of her “Born This Way Ball” Tour. She was using a cane and eventually, confined to a wheelchair. The strenuous dancing had created a crater in her hip, almost to the point of breaking it.

As she lay around and puffed on up to fifteen to twenty joints per day, she also developed a habit for Juvederm injections in her face. Finally, a few months before shooting her “Applause” video, her team sat her down and told her she had to stop so she’d actually look like herself for the shoot.

Howard asked Lady Gaga if it’s true that her father gets 50 percent of the star’s money. It’s not true at all – he actually gets all of her money, if only to watch over it. Gaga trusts her family completely, going so far as to consider her money, the “family’s money.”

She recently had to inform her dad that she was making an odd purchase – Michael Jackson’s tour wardrobe. Gaga really loves and looks up to Michael and didn’t like the idea of his costumes being split up and spread out. She wouldn’t say exactly how much she spent on the wardrobe, but admitted it was in the millions. Someday, she hopes to create a museum for them and give the proceeds to charity.

Lady Gaga Tells Her Stories to Howard, Song by Song

What Would You Eat From Our Vending Machine?