A caller named Lou phoned in this morning, ostensibly to ask about the likelihood that he’d contract herpes from a blow job, but crafty Lou quickly segued into a move that we call “Begging for Birthday Show Tickets.”

Unfortunately, it did not go well for Lou. The game on hand was the exciting new “High Pitch Erik General Knowledge Game!”

As a practice question, High Pitch was asked if he knew what ocean Hawaii was in. High Pitch said “the Atlantic,” so obviously the answer was no. Lou was sure he’d know it, so this was not a good start.

Next up, for the big prize, will Erik know “Who did President Bush defeat in the 2004 Presidential Election?” Howard and Robin couldn’t even remember who it was. Robin eventually recalled John Kerry, but Howard admitted he’d be shocked if Erik got it right, and Lou agreed. Did he know it?

Yes! Erik got it. 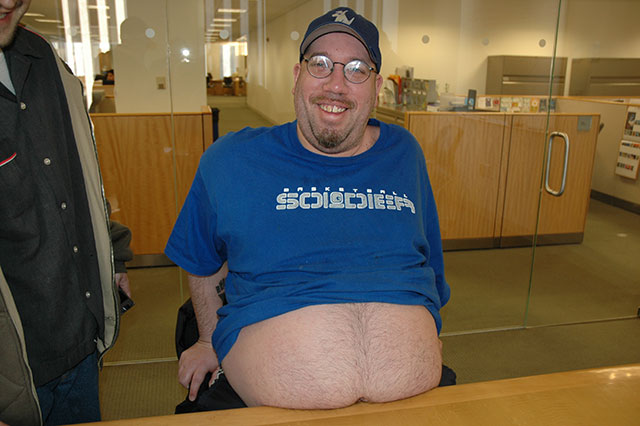 Lou begged and pleaded for one more chance. Hoard relented but made him promise that if he got the next question wrong, he had to be a man and just hang up. Lou agreed. We asked High Pitch “What does DUI stand for?” Both Howard and Robin said he would know it, Fred said there was no way he’d get it. Lou made the one mistake that Howard never makes: listening to Fred.

Erik got it right.

While the line should have clicked and buzzed out, do you think Lou hung up like a man? No, of course not. He stayed on the line and begged Howard for another chance.

Just as Howard was about to give in, Ronnie burst through the studio door, screaming that if Howard didn’t hang up on the douchebag, Ronnie would walk up to the console and do it himself. “You made a f*cking deal dude, hang up!”

Howard did and the whole back office stood up and cheered.