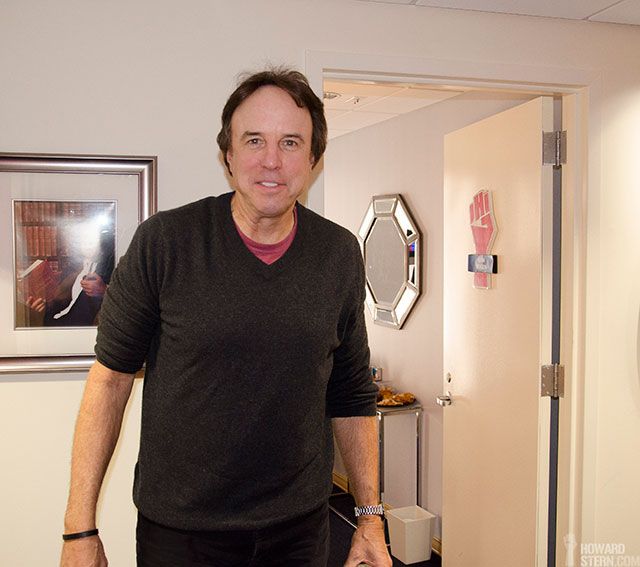 Comedian and actor Kevin Nealon stopped by this show this morning to talk about starting out in comedy, rubbing elbows with icons and, one of Howard’s favorite recent comedy specials: Kevin Nealon’s ‘Whelmed, But Not Overly.’

Here are some highlights from their conversation:

When he decided he wanted to break into comedy, Kevin wisely took a position as a bartender at the legendary Improv. There, while pouring admittedly bad drinks, he got to watch Andy Kaufman, Robin Williams, Steve Martin, Richard Lewis and Jay Leno. In the event that somebody wouldn’t show up, the owner would let Kevin get some stage time.

Andy Kaufman and Steve Martin were both big influences on Kevin in the Improv days. He once cornered Kaufman outside the club and asked him about Transcendental Meditation. Kevin watched Kaufman’s face and moles as he launched into an hour long monologue about the technique.

Being hired by Saturday Night Live was a huge break for Kevin. Howard has always sort of felt like Kevin wasn’t used as much as he should have been. Kevin disagreed, saying “I was used for what I was the best at.”

Howard wanted to know who Kevin’s favorite comedian of all time was, and Kevin said Howard. He said he’s always thought of Howard a comedian and loves his timing. Howard thanked him, but admitted that he’s way too sexy to be a comic.

LIVING AMONG (AND FARTING ON) THE STARS

One of Kevin’s most famous SNL sketches was the sketch he did with Dana Carvey called “Hanz and Franz,” about two Austrian bodybuilders based on Arnold Schwarzenegger. When Arnold hosted the show, Kevin got word that Arnold wanted to meet them in his dressing room. They got to the room and it was filled with cigar smoke. He and Dana were scared about his reaction as they looked at him with a “Hanz and Franz” sketch script they’d written for him to star in. But, luckily, Arnold had a sense of humor about their sketch.*

Kevin did the movie Anger Management with Jack Nicholson and Kevin approached him with the question: “Have you been golfing at Sherwood Country Club lately?” Kevin asked the question twice before Jack answered with “Not since the last time you asked me.” Kevin was haunted by that response and didn’t know what Jack meant by it.

Months later, Kevin saw Jack at a party. He walked up to the film icon and asked “Have you been golfing at Sherwood Country Club lately?” Just then, Al Pacino tapped Jack on the shoulder and he completely turned his back on Kevin to talk to Al. Kevin was staring at Jack’s back. “It looked like I was waiting in line to meet Al Pacino.”

Kevin grew increasingly incensed that he was snubbed and finally “crop-dusted” Nicholson with farts all up and down his back. He slid away to the other end of the party and heard Jack exclaim ”Jesus Christ, what died in here?”

Kevin was proud, because not only did he meet Jack Nicholson, “I’ve been inside him.”

If you ask him about other icons he’s interacted with, he’ll tell you he’s peed next to Woody Allen, laughed at a blow job joke Walter Cronkite told him, and body-surfed next to Steve Martin. After surfing side by side for two days, Steve turned to Kevin and said “just because we’ve hung out doesn’t mean we’ll be friends.”

He also formed a close (and sort of weird) friendship with singer James Taylor. James was rehearsing for SNL and he and Kevin got to talking. James told him to call him up sometime and they’d go have dinner, but the weird thing is they actually did have dinner.

Kevin likened the “date” to going out with a hot chick for the first time. Later on, he helped James pick a set list for one of his shows and even shot some video of James recording one of his albums at his vineyard. Howard pointed out how weird it was that James was putting Kevin to work; it reminded him of John Lennon finding excuses to keep Yoko around with the band.

WHELMED, BUT NOT OVERLY

Howard loved Kevin’s last Showtime special and wanted to hear some of the great jokes and themes Kevin had done so well.

In Nashville, Kevin had a black cab driver named Boyd. He was terrified of being perceived as referring to the driver as “boy.” “I never pronounced the ‘D’ so hard in my life. Nice town you’ve got here Boy-DAH.”

“What about these Tsunami’s with a “T”? They’re so powerful they’re sucking extra letters from the alphabet.”

Kevin came up with the brilliant idea of swiping your finger in your ass before the sobriety test where you close your eyes and touch your nose with your finger. If it stinks, your nose will find your finger.

Kevin has never done cocaine in his life, though it’s not for any kind of moral reason. “I had a terrible self-image and they always brought it out on a mirror.”

VACATIONING WITH THE ‘IN’ CROWD

Finally, Kevin suggested he and Howard plan a vacation together. Howard wasn’t opposed to the idea, and felt he might enjoy Kevin’s company. Maybe next winter it will be Howard and Beth and Jimmy and Molly and Justin and Jennifer and Kevin and Susan. Though, like James Taylor did, Howard warned: “I might ask you to be my videographer.”

*Howard also had a story about meeting Arnold for the first time. Charlie Rose had a TV show in Washington DC and Howard and Arnold were both guests. Howard told Fred that they had to meet him and they followed him into the bathroom. “He was shitting and farting.”