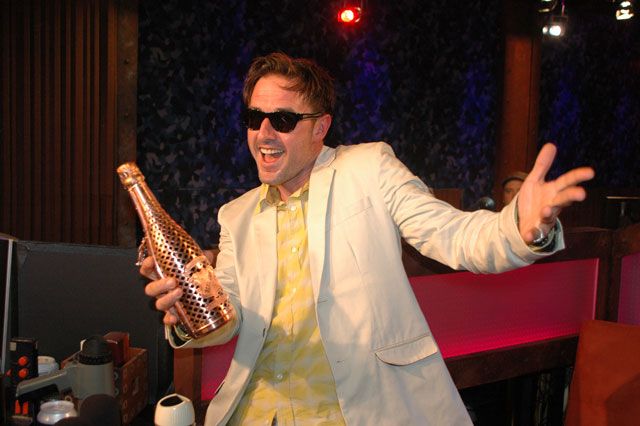 He came in smelling of vanilla cologne and wanted to talk more about his profound new idea, “The Kindness Game” – which he called up drunk to discuss a few months ago – along with fatherhood, Robin Quivers, and Courteney Cox.

Here are the highlights of David’s interview:

* David drunkenly sort-of revealed that his girlfriend Christina McLarty was pregnant when he called into the show in 2013, and it’s still true. The couple are expecting a baby boy and, contrary to a report Howard read in the Globe, did not buy a “baby jacuzzi.”

* David seemed a little jealous that Howard was in Mexico hanging out with his ex-wife Courteney Cox and Jennifer Aniston over the holiday break, because he understood that it was probably a blast.

* David continued to flirt with Robin Quivers – the two famously kissed, it was revealed last year.

* David is back to drinking but tries sticking to beer, wine, and champagne (like our own Richard Christy). ‘”I’m an alcoholic,” David said. “I’m a drug addict crazy mad man.”

* David told Eric the Actor that he wants to hang out in L.A., promising to get the Wack Packer laid. David even admitted that he would have sex with a female Eric the Actor.

* David once again spoke about his wish that people were nicer to each other – something he calls “The Kindness Game.” He wants everyone to know that we’re all equal, celebrities are no better than commoners. Howard asked if his club Bootsy Bellows, named after his mother’s burlesque alter-ego, had a VIP room. David reluctantly admitted it did. David realized that the separation of VIPs from commoners does make him a part of the problem, but he will fight on anyway.

* Also, for some reason, David asked the media that he be quoted saying the following: ‘God is at least half a f*cking woman, bitches.’

Thanks to Superfan David Arquette for giving a quick fan tour of Stern Show compound!