One of the most famous weathermen in America (and there aren’t many) Sam Champion stopped by this morning to talk to Howard about everything from coming out of the closet to his controversial move from Good Morning America to the Weather Channel.

Here are the highlights from Sam’s interview: 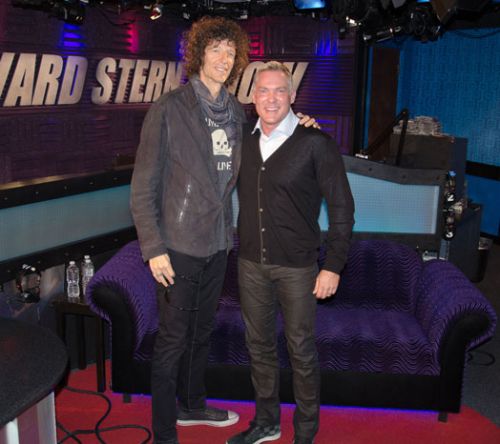 When he met Rubem Robierb, the man who would become his husband, he still wasn’t planning on sitting down for any big interview and announcing ‘I’m gay!’ At a wedding, Sam and Rubem were having a good time and someone asked ‘Are you two getting married?’ Sam responded yes and that was his public ‘coming out.

He didn’t clear it with anybody at ABC, and it didn’t really cause him any problems. Coming out to his family, however, was different. He told his parents he was gay in his late twenties and his father, a retired colonel, had issues dealing with it. They didn’t speak for two years, but he eventually came around.

He left Good Morning America when the show was on top (it still is), for the Weather Channel. He also occasionally does guest spots on GMA’s rival the Today Show, but claimed that it wasn’t any kind of f*ck you to his old family. Howard theorized that NBC was freaking out about being number two and wanted to hire Sam away and break up the chemistry on Good Morning America. Sam said NBC owns part of the Weather Channel, but they aren’t the major decision makers.

Be sure to check out Sam’s new show AMHQ on The Weather Channel beginning Marck 17th, and follow Sam on Twitter.

At SiriusXM studios this morning ready to go live on the @sternshow with Stern pal @robertAbooey! pic.twitter.com/vaYI9anogp