The comedian and TV personality talks E! Network, A-Rod, and her father 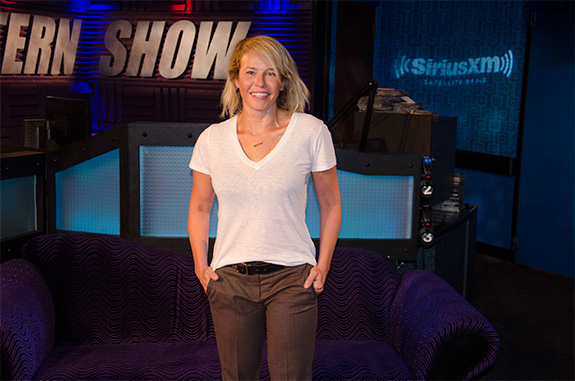 Comedienne and late night host Chelsea Handler stopped by this morning to promote her new book and tour “Uganda Be Kidding Me” and opened up about all the things that bother her.

And there are a lot of them!

Here are the highlights of Chelsea’s talk with Howard:

The E! Network – Most surprisingly, Chelsea did not shy away from shitting all over her own network, E!

She called it ‘a sad, sad place to live,’ and admitted that her contract is coming up for renewal, and she may look for new home. When she got to E!, she felt it was a much funnier and cooler network, but , Chelsea say, it’s gone way downhill.

She’s not thrilled with the idea of going to a major network either, because there are so many people to answer to and so many rules. She cited the ideal situation as something like Netflix where people can watch her show whenever they want.

A-Rod – New York Yankee Alex Rodriguez was another target for Chelsea’s criticism. She is not a fan of him but he’s stated he believes she is just being snarky and funny. So this morning, Chelsea made it clear, in no uncertain terms, that she really does not like him, stating that the statue of himself as a centaur that allegedly in his bedroom is proof that he’s a douche.

Her Own Father – Even Mr. Handler, Chelsea’s dad, got hit hard with Chelsea’s blast of complaints. He’s in an old-age home on her dime and first he wouldn’t stop sexually harassing the nurses – specifically the nurses who were black. The problem persisted so Chelsea eventually moved him to an all-male nursing home, except most of the male nurses there were gay. Chelsea told Howard her father berated them and even threw around the “F” word, so that didn’t work out either. She had to find a white, all-male, straight, assisted living facility. “It’s like shopping for a KKK member,” Chelsea joked.

Her iPhone – Even something as common as an iPhone gets under Chelsea’s skin. She hates technology, so her staff has to help her use it, causing her to feel bad about her co-dependent life.

She realized how bad it’d gotten one day when she opened her fridge to find there were clear Tupperware containers filled with different kinds of fruit, all labeled explaining which fruit each contained.

“At some point, two people had a conversation and said ‘I don’t think she knows what grapes are anymore,'” Chelsea said.

Censorship – Howard had heard that Comcast told Chelsea not to make any jokes about the “Today” show or Matt Lauer on her own series. Chelsea explained that was untrue, but she was recently asked to edit out a joke she made about Ryan Seacrest at the Oscars. The joke was that Ryan Seacrest is straight, but, “If you’re a straight man covering the Oscars you need to get a dick in your ass.”

WHAT CHELSEA DOESN’T CARE ABOUT:

Marriage – Chelsea is content to have a few different irons in the fire and not commit to one guy. She admitted that she doesn’t know how to be a girl. “I have to travel the world to get penetrated,” Chelsea joked. She picks up dudes all over, and you can read about all about it any one of her many books.

Angelina Jolie – Chelsea used to goof on Angelina quite a bit but she tried to tone it down once she became friends with Jennifer Aniston. She didn’t want the press to think she was somehow speaking for Jennifer. “I don’t give a shit about Angelina Jolie,” Chelsea told Howard.

She did, however, recently tweet a joke about Angelina trying to adopt Lupita Nyong’o and the comment was labeled racist. Howard, Robin, and Chelsea all found the racism allegations ridiculous, though. “It was pretty clearly a joke,” Chelsea said.

Madonna – Chelsea went to Madonna’s Oscars party and really couldn’t care less about the pop icon. She slammed vodkas and danced until 5:30 in the morning with the likes of Mary McCormack and Orlando Bloom. “I don’t care about meeting Madonna, do you?” Chelsea asked. Actually, Howard would probably like to meet Madonna.

Her friends – Like Gwyneth Paltrow, Whitney Cummings, Jennifer Aniston, Mary McCormack, Sandra Bullock, and others. Chelsea admitted to becoming friends with 20 percent of the people who come on her show.

Partying – Chelsea told Howard she’s realized she needs to have fun and get wasted in order to stay sane. She can’t do as many drugs now that she’s 39, but she’ll still drink – like the above-mentioned Madonna party where she stayed out until 5:30 a.m. despite being scheduled to be on her own show at 2 p.m. She also admitted to taking two Quaaludes at a party at Jane Fonda’s house.

Her boobs – Chelsea is proud of her boobs and is not shy about showing them off. She recently went topless around her friends while swimming and said she’d even do it if Howard were around. Mary McCormack told her that she ought to consider a breast-reduction, but once she saw Chelsea topless, she said her boobs were awesome and took it all back.

Check out Chelsea’s book ‘Uganda Be Kidding Me’ and catch her when she swings by your city on the accompanying stand-up tour.