Staffer opens up about his on-set experience

The show started off today with a little guitar playing by Howard Stern and then turned to a discussion about Stern Show writer Benjamin (Benjy) Bronk being offered the starring role as Miscellaneous Homeless Individual in “Sharknado 2” – which he wrapped filming last Wednesday (he also began filming last Wednesday).

He showed up to work right on time and exactly where he was supposed to be. Like Elizabeth Taylor before him, Benjy decided that being easy to work with was how bona fide stars should act.

Benjy sat down with his girlfriend (whom he tried to get a part for in the film) and Howard 100 News reporter Lisa G to try to memorize his lines. Eventually, Lisa proved so annoying – giving Benjy line reads and suggestions – that he had to ask her to leave.

He was able to learn his dialogue: ‘Repent Ye Sinners, the end is near!’ 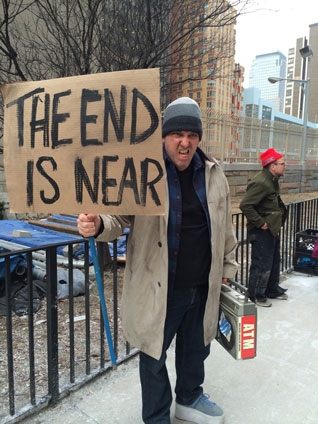 When his big moment came, Benjy lit up. He was knocked to the ground by Miscellaneous Wall Street Guy and fell with such gusto that the director was worried he’d injure himself.

He delivered his line –then, genius struck. The movie is so ridiculously low-budget that they have no green screen or robot shark to simulate the attack, so the director just screams ‘Shark!’ and everyone reacts. Benjy decided that unlike any human being who was faced with an enormous flying shark, he would welcome the beast with gusto ‘Take me!’

Not since his performance as Queen Benjamin in the legendary Stern Show disaster ‘Supertwink’ has Benjy’s acting been showcased like this.

Be sure to look for Benjy’s performance on the SyFy channel sometime in July.

As for the behind-the-scenes drama, Benjy got to meet icons like Sandra ‘Pepa’ Denton and Kari Wuhrer. One thing he didn’t meet was the Craft Services table. Although he admitted to eating for free at various film sets around New York City, when it came time for him to actually enjoy the perk on a set he belonged on, Benjy demurred.

Benjy closed his story by thanking everyone involved with this ‘iconic’ New York City movie.