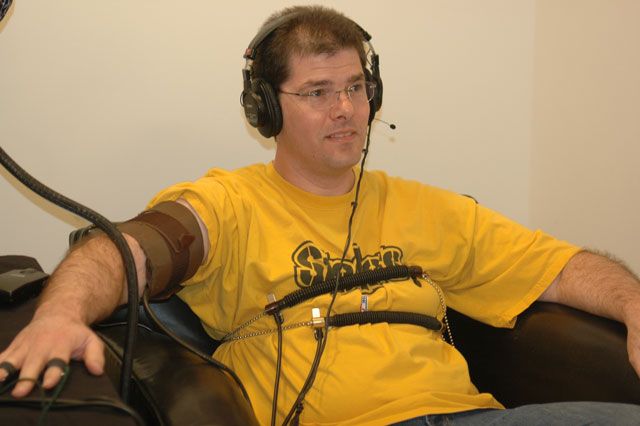 TV-watching icon Jon Hein has built his whole life around sitting in front of the boob-tube. He coined the phrase ‘Jump the Shark‘ which he turned into a popular website (which first got him on the Stern Show many years ago) that he sold for a reported (or made up by us) hundred billion dollars in 2006.

Howard asked the even-keeled rich nerd how many hours he spent watching television and he estimated that during the week, he watches about four hours per night and a little more on the weekends.

Everyone’s jaw hit the floor, in awe at the level of Jon’s denial. Jon seemingly watches ALL of TV –and it’s unclear exactly how he crams so much TV-watching into 24 daily hours.

Robin announced that, when she was triumphing over cancer last year, she spent a lot of time resting and watching so much TV that she started dabbling in foreign series. She’d recommend something obscure to Jon and – surprise! – he would’ve already seen it.

John realized that he wasn’t factoring in the two hours per day he watches TV on the train to and from work, and admitted that his beautiful wife, Debbie, is trying to get him to be more active.

He’s making an effort, actually leaving the house to sit and watch things like movies and Broadway shows.

He also watched Jeopardy daily on his elliptical machine. He puffs and puffs and collapses right by the time Final Jeopardy is played. (Yeah right. We’ll believe this when we see it Jon – film it!)

Jon promises to log his tv watching this week for the website. Til the official numbers come in, here’s what he says he’s watching now:

TV Shows CURRENTLY in my rotation:

Soon to join the rotation: