He famously has a fetish for women peeing on him, he likes to talk about his love of massage parlors, and he once told a famous story involving hiding in a bathroom linen closet while spying on a relative.

But when you think of Sal’s odd sex-life, the first story that pops into your head probably takes place at a Times Square Peep Show booth.

While Howard was reading about the pizza chain Sbarro filing for bankruptcy, Sal trotted in to say he’s been to Sbarro – not to eat, but for their napkins.

What is so special about Sbarro napkins? Nothing except that there was a Sbarro right by the ‘booths’ Sal ‘used to’ frequent. Sal had a ritual where he’d use one napkin to push ‘the button’ and another to open the door when he was finished. 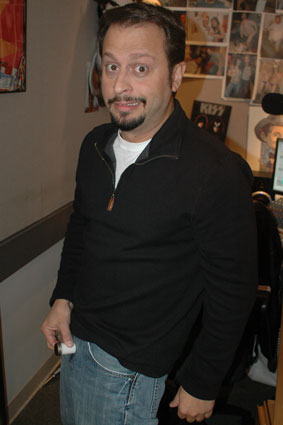 The peep show itself provided no clean-up paraphernalia because you weren’t supposed to pleasure yourself, you were just supposed to sit by yourself in an uncomfortable closet and enjoy the video or live show. Your hands were supposed to remain at your sides.

But Sal knew better what actually went on in those booths. He told on story where the girl behind the glass motioned for him to pick up the phone so they could talk – much like when you’re visiting a prison inmate – and when he did, he got an earful of another man’s seed.

Presumably, Sal would also use a napkin as a receptacle for his product as he finished enjoying the show.

He admitted that men would all check their shoes as they walked out of the room, as they’d all be pretty well-coated.

Once, when Sal had no napkins, he used his white collared shirt to wipe up and spent the rest of the day with it sticking to his thigh.