Comedian, prankster, America’s Got Talent judge, and Ronnie the Limo Driver fan Howie Mandel stopped by to give you the juicy dirt from the AGT set, tell a few funny stories about his early TV appearances and try to steal Ronnie Mund away from Howard.

AGT: THE BACKSTAGE SECRETS YOU WON’T HEAR ANYWHERE ELSE!

Howard and Howie will spend a lot of time together this Spring on Summer on the set of America’s Got Talent. Both swear that his season is the best one ever and, as always, they dished about all the hijinks and goings on that are too hot for TV.

One particularly funny incident occurred during one of the few bad acts that auditioned. Howie went to hit his giant X busser and it wouldn’t work. Howard tried to do the same and his buzzer was out too. Both Heidi and Mel B tried and none of the buzzers were operational. Mel B was particularly incensed, asking what the f*ck is wrong with her buzzer.

The act played on, unaware that the judges hated them, thinking they were really onto something. Finally, a technician pulled the curtain back and found that a cord had been pulled out of the outlet to make room for an iPhone charger. The tech followed the length of the charger right up to Scary Spice herself.

‘My phone was out of powah’, Mel said in defense. Classic Mel B!

Howie told a few stories from his appearance on classic (and not-so-classic) TV shows in the 1980s.

Howie first appeared on the Tonight Show thanks to logtime Stern Show regular Joan Rivers, who was the permanent guest host for Johnny Carson at the time. Howie had been told that his comedy wasn’t Johnny’s style, so he decided to try to convince Joan to have him on on one of her nights. He got a slot right before Joan’s regular spot at the Comedy Store and, even though he was sick as a dog, he somehow got through it, the crowd went nuts. Joan loved him too, and after waiting in agony for Joan to finish her set, he gave her his card. Joan called and Howie killed on the show.

It turned out that Johnny was watching (Johnny was probably always watching) and he loved what Howie did. He asked Howie back and Howie killed again, but this time he took a risk. He walked out with 3D glasses and asked Johnny to put them on. Johnny obliged and Howie began whipping stuffed animals at Johnny’s face as hard as he could, saying ‘Doesn’t it feel like they’re coming right at you?’ Thankfully Johnny laughed. 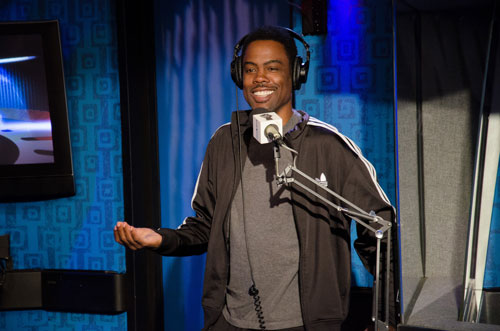 MAKE IT RAIN WITH RONNIE MUND

Howie is a huge fan of Howard’s limo driver, Ronnie Mund. So much so that he had an idea for a TV show starring Ronnie and asked Howard for permission to get involved with Ronnie and pitch the show. Howard agreed, and we’re glad he did because the show sounds awesome. The premise is like those shows where a famous chef goes into a downtrodden restaurant and fixes up the whole operation or a hairstylist ‘rescues’ an ailing salon with her expertise.

Except it’s Ronnie so, naturally, we’re talking about strip clubs. Yes, Ricky Man himself will show up to your Bob’s Classy Ladies or your Boobie Bungalow and he’ll tell you where to dim the lights and how to get the crowd excited.

The show has a working title of ‘Make it Rain’ and we can’t wait to see Ronnie do just that.

Check out Howie’s current show, Deal with It on TBS.