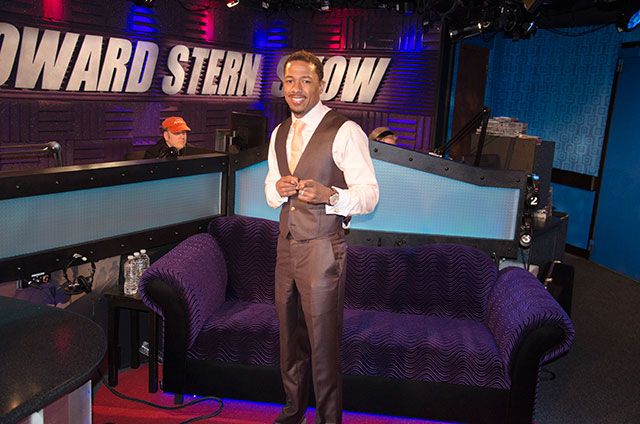 Mr. Entertainment himself, another of Howard’s “America’s Got Talent” co-workers, Nick Cannon dropped in this morning, hot off his latest controversy. People were outraged when Nick appeared in white face (actually, as a white character named Connor Smallnut) and Howard was eager to talk to him about it. Of course, the conversation also included Nick’s life with his wife, Mariah Carey.

Here are the highlights from Nick’s interview:

First up, White Face Gate. Like Garth Brooks before him, Nick created an alter ego for his album of white dance music. Just because Nick happened to be a different race than his alter ego, the world reacted with shock. Howard couldn’t understand why people equated a black guy dressing up as a white guy to old-fashioned minstrel show blackface. Nick took the controversy in stride and said he was actually glad that his project got so much attention. Check out White People Party Music on iTunes.

Naturally, Howard could not ignore Nick’s private life, since he’s married to one of the biggest stars in music, Mariah Carey. Howard wanted to know if it was true that Mariah fires a nanny every other week, and, surprisingly, Nick readily confirmed that it was 100% true. ‘Every other week!’ It’s not exactly firing, though, since they have temporary agreements with the nannies, but they never seem to work out. Nick theorized that Mariah gets jealous when the children start to get close to the nanny and cuts the cord.

Howard heard that Nick caught a lot of flack for his last appearance on the show when he talked about his sex life with (and before) Mariah.

Ms. Carey was not too happy about Nick speaking openly about having sex with Kim Kardashian, and she told him so, asking him “Can you keep your past whorish ways to yourself this morning?” according to Nick.

The disagreements don’t affect their sex life, however. Nick claims they did it right after that argument, as they usually do. Nick detailed his plan to give it to his wife so good that she immediately falls asleep afterward and the fight is over.

The sex is still good, according to Nick, and even though their twins sleep in bed with them, he and Mariah find time (and space in their mansion) to get it on regularly.

For all things Nick Cannon, go to NickCannon.com