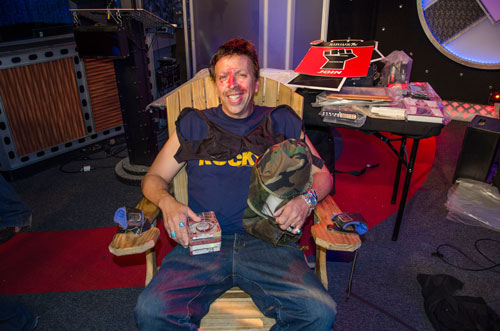 At the top of the show, a guy called in and said that regular caller (and retired driver’s safety instructor) Bobo is a loser for hanging on the phone all day every day.

Naturally, Bobo was waiting on hold, so Howard picked up on him and let the two of them go at it. Well, it was some fight.

Bobo is not typically a braggart, but he dove right in saying he’s made more out of his life than he had any right to – given his 87 IQ – and he’s even won numerous awards for being the top safety instructor in the state (and then he even claimed to have been the top instructor in the country!).

Robin, always one to stoke a great argument, told Bobo that he had the guy on the ropes, ‘hit him with awards!’

Bobo, though heavily decorated, declined to go into specifics, but did mention one thing: ‘People used to clap at the end of my classes.’

And that’s sort of the greatest award of all, isn’t it?

Anyway, we’re giving Bobo the award for Wack Packer with the Most Awards.