TV icon and former presidential candidate is back 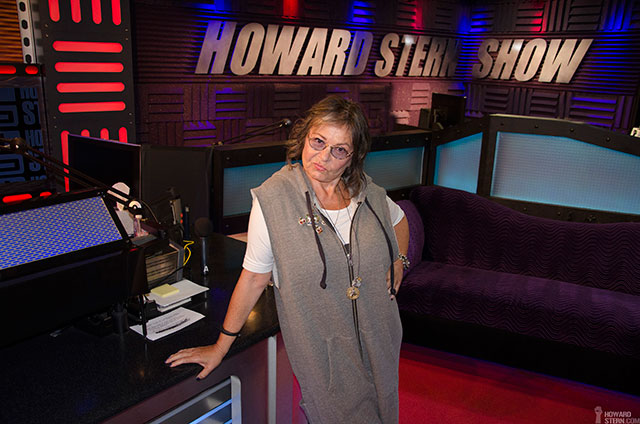 TV icon and former presidential candidate Rosanne Barr is back on TV, like Howard, as a judge. The two great deciders sat down this morning to talk about network TV, comedy, and, of course, her ex-husband Tom Arnold.

Here are the highlights from Howard’s interview with Roseanne:

To say that Roseanne’s relationship with TV executives is tumultuous is like saying that Scott “the Engineer” Salem doesn’t love working. Neither statement does their situation justice. Roseanne flat out hates the way network TV comedy is run today and is not shy about voicing her opinion.

She claims that network execs have no idea what to do with a performer who is also a writer, especially when it’s a woman. She recently had a sitcom deal for a show called “Downwardly Mobile” about the queen of a trailer park. Things didn’t go well and Roseanne lashed out at the network on Twitter, claiming her showrunner disappeared for weeks and the network ignored her.

“One thing I’ve learned in Hollywood,” Roseanne told Howard, “is every time someone tells me I’m a genius – that means I am going to get fucked.”

“Any guy who does a tenth of what you do gets 10 times the praise,” Roseanne continued. She revealed that Jerry Seinfeld had a much, much better deal than she did, and got that deal in part thanks to her breaking the ground. Roseanne claimed that she only owns about 20 percent of her own show.

Though Roseanne vowed never to return to TV the gig as a judge on the revamped “Last Comic Standing” was too good to pass up. Unlike Howard, she claims she’s only “there for an hour” working. Howard couldn’t believe that since he has to sit at “America’s Got Talent” for days on end.

Roseanne said she just loves being around comedy and has a love for anybody who tries to do stand-up, but cites Richard Pryor and Lenny Bruce as two of the absolute best. She also loves Joan Rivers and Eddie Murphy. Unlike most other comedians, Roseanne agreed with Howard that Bill Cosby wasn’t all that special. Both claimed to not understand Bill’s stand-up.

As for her ex-husband, the famous Tom Arnold, their relationship has gone from out-and-out hatred to a sort of playful dislike. She recently sent Tom a script she was working on and he publicly tweeted that, though it was funny, it wasn’t right for NBC. Roseanne hit the ceiling.