Willie Nelson stopped by the show this morning to talk about his new album “Band of Brothers,” and what was curious was that he wasn’t enveloped in a cloud of smoke – because he’s switched to a vaporizer pen. He offered Howard a hit, but Howard declined. 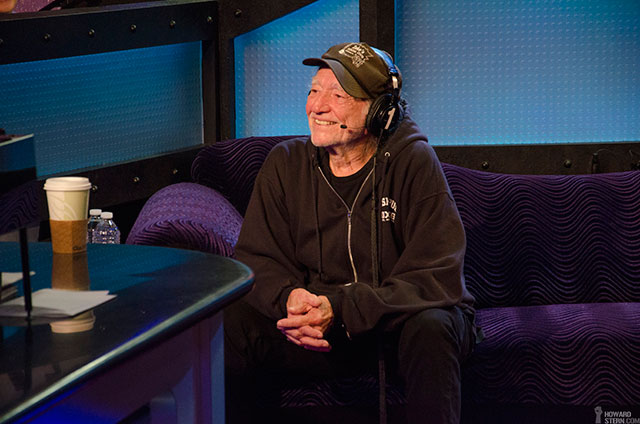 Willie started writing poetry at age five, thanks to his grandparents, who were both musicians. They exposed little Willie to the beautiful things in life early on, and he took to it quickly. He performed his first poem at church as a kid and was so nervous that he started picking his nose furiously. It bled all over his white sailor suit and he earned himself the nickname ‘Booger Red’.

Incidentally, Shotgun Willie was another nickname the stuck to Willie. He wrote a song with that title after he brandished a shotgun at his daughter’s boyfriend because he was beating her up.

Once he became an adult, he dropped out of college (where he was studying business administration, if you can imagine) and started working as a radio DJ for $40 a week. He got to play his own records, though, and plug his bar gigs.

Song by Song With Willie

Howard asked him about some of his best-known songs, and lets just say marijuana has not affected Willie’s memory.

On the Road Again – One of Willie’s best known songs, he wrote this gem for the movie Honeysuckle Rose. Willie was asked to write a song about being on the road, and he quickly came up with the lyrics. He was on an airplane at the time, and actually wrote the song on a barf bag. When he was questioned about the melody, Willie said to fear not, he’d have the melody by the time he got to the studio to record it. And he did.

Crazy – Willie had recently arrived in Nashville, intent on writing songs to sell to singers. He would spend nights in Tootsie’s Orchid Lounge, with his own songs on the jukebox. One fateful night, he played ‘Crazy’ for Patsy Cline’s husband. He immediately said they had to play the song for Patsy right away. Even though it was midnight, they drove to the Cline residence and Patsy in the car while Willie played her the sing. She loved it, and recorded it then following week. It’s a version you might have heard.

Pretty Paper – Willie wrote this one for the great Roy Orbison, who recorded it in 1963.

MIND IS BLOWN! @willienelson is on @sternshow. He wrote “Crazy,” “Night Life” and “Funny How Time Slips Away” IN THE SAME WEEK.

These days, Willie leads a content, easy life. He tours extensively in his famous bus, he goes for long drives when he wants to write a song, he ‘vapes’ a lot of weed, he relaxes and plays dominos with the likes of Woody Harrelson, he hangs out with his wife of more than twenty years and yes, he pays his taxes.

He also gets sweet little gigs like his recent John Varvatos campaign and a gig at Bill Gates’ wedding, where he was paid $1 million to sing eight songs.