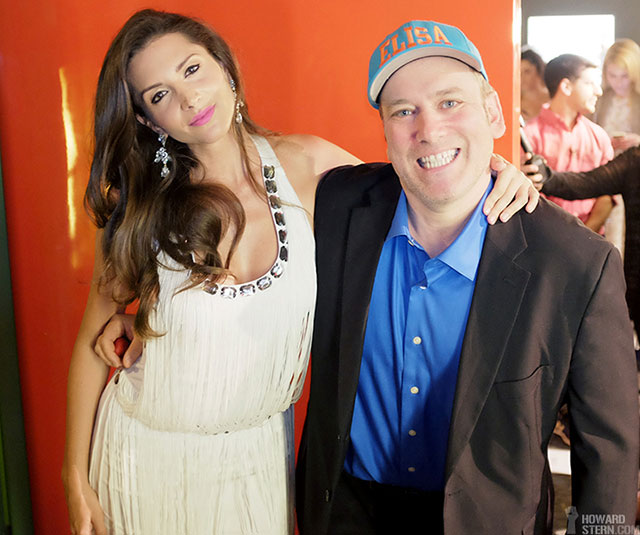 Elisa and Benjy at the My Man is a Loser premiere

It is completely impossible to get a straight answer out of Stern Show writer Benjy Bronk. So, last week, when his longtime girlfriend Elisa told the Howard 100 News (and Twitter) that she and Benjy had broken up, the world wondered how Benjy would evade, distort, or otherwise shtick up the story.

Fear not, he accomplished it! Benjy said yesterday that although Elisa had broken up with him, they are still together because he refuses to recognize their split.

Today, Howard got Elisa on the phone and she dropped a major bombshell: The haven’t had sexual intercourse since September of 2013. Benjy insisted that they’ve done all kinds of other sexual things, but Elisa said the bottom line was she wasn’t giving it up because Benjy wasn’t nice to her.

Elisa claimed that Benjy is always yelling at her, each and every day. Even yesterday, while he should be desperately trying to win her back, he yelled at her. What did she do? She bought him a said – ‘just to be sweet’ – and he yelled because the salad had cheese on it.

The pudgy little comedy writer even berated her in front of her mother while they were out at a restaurant. Benjy blamed a lot of his cranky behavior on the fact that he has to get up early in the morning while his other half doesn’t – you know, like every other staff member on this show.

Sometimes, Benjy even sleeps in their second – more luxurious – apartment while Elisa sleeps in their main pad. Benjy claimed they got a good deal on a nice place, so he uses it as an office and, apparently, as ‘the dog house’ too.

Howard tried to warn the short contrarian that he was never going to find a hotter chick than Elisa. Benjy swore her physical appearance had nothing to do with it. Benjy said he was in love with her as a person.

Elisa waxed poetic a little: ‘Nobody has loved me the way Benjy has loved me.,’ she said. But is that enough? – ‘I don’t think it is.’

At the end of the call, Elisa said they were still broken up, while Benjy said that he loved her very much and he’s see her later. Of course, we’ll keep you thoroughly updated.