Poker player and professional Instagrammer Dan Bilzerian stopped by this morning. He was hung-over, but he’s still a badass dude with a kick ass life. 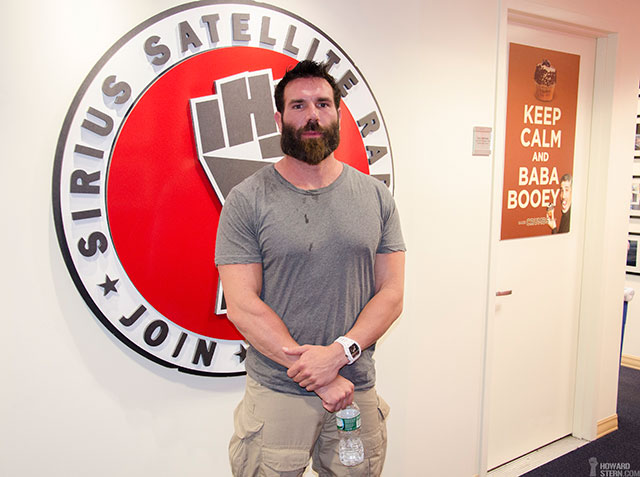 Here are just some of the facts and highlights from Dan’s interview with Howard, by the numbers:

3.4 million – The number of Instagram followers Dan earned by posting photos of his outrageous life (mostly guns and super-hot chicks)

$3.6 million – the largest amount Dan has lost in a game, but he lost this exact amount three separate times, which messed with his head.

3 – The number of weeks Dan spent in jail for bringing an M16 onto his school’s parking lot.

10 – The number of chicks Dan partied with last night

$400 million – Dan’s father’s net worth at one point. He made a ton of dough taking over corporations. In 1989 he was indicted for something called ‘stock parking’.

2 – The number of days left before Navy SEAL graduation when Dan was thrown out. He admits he walked around pretty cocky, because he was very physically fit and had been through almost the entire program before. He pissed the wrong people off.

25 – The age Dan was when he had a heart attack. He was on cocaine, ecstasy, booze and an astonishing 200 milligrams of Viagra.

$100,000 – The amount of money Dan was offered to shave off his beard. It was in the middle of a poker game and he didn’t do it. Funnily enough, a few weeks later Dan had to shave it off anyway for his role as a secret service agent in ‘Olympus Has Fallen’.

3 – The number of chefs Dan has in his employ. He eats so much that he actually wore one chef down when she worked alone, so he now roates them. They work hin 12 hour shifts and cover his homes in Las Vegas and Los Angeles. He also emplys three assistants.

4 – The largest number of chicks Dan has banged at once.

I loved the interview on the show today. @DanBilzerian @sternshow. You’re the man.

Since Dan hit it big in the poker world, he’s pretty much travelled the world in private jets (one of which he just bought and is in the middle of totally rebuilding) with many hot chicks and an impressive arsenal of guns. He recently bought his buddy’s truck and shot at it just to blow it up for an Instagram video.

When you’re not obsessively tracking his every move on Instagram, check out his performance in the new movie ‘The Equalizer’.