Everyone’s favorite drinking buddy – Richard Christy – loves drinking beer. The only thing that’s better than drinking beer is travelling out of your way to celebrate drinking beer, which he and his lovely wife did this past weekend. 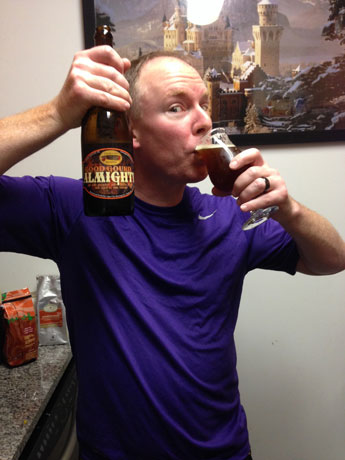 They travelled upstate and camped out for an all-night beer festival. Richard was so excited that he didn’t shower or brush his teeth – thought he did swish soda around in his mouth, which is pretty much the opposite of brushing your teeth.

Everybody was sharing their hard-to-find beer selections and getting so wasted that people were crawling into the wrong tents and sleeping bags. ‘I was surprised I didn’t wake up with a bottle in my ass’, he said, grinning.

Howard announced at age nineteen that he was never going camping again and, as you know, is so skeeved out by germs that the thought of sharing bottled of beer with strangers had him almost vomiting at his console.

Richard has no such hang-ups, and would probably share a kiddie pool filled with beer with a hundred strangers.