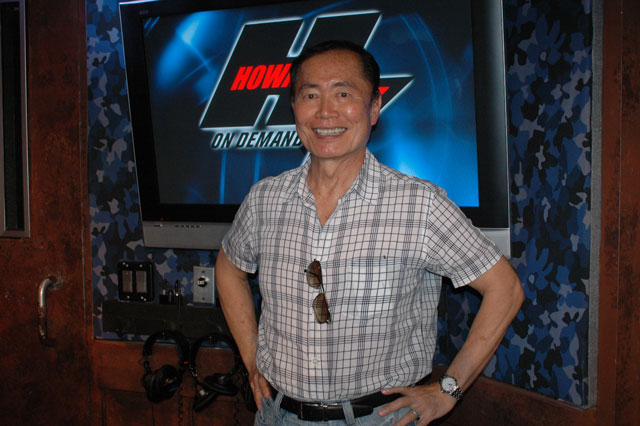 George Takei, the longtime Stern Show announcer and a man who is quickly becoming the most sought-after performer in show business was finally back in our studio, sitting in for the morning.

George has so much going on his glamorous Hollywood life that most of the show was George answering questions about everything from his hatred of his former co-star William Shatner, to, of course, his Sunday-only sex life with his husband Brad.

George, naturally, announced the Stern Show cast at Howard’s Birthday Bash, but as he took the stage, just after Rob Zombie had finished performing ‘Great American Nightmare’, he announced him as ‘Rob Zodiac’ for some reason. Even George isn’t sure why he made the gaffe, but blamed it on the fact that both words start with ‘Z’.

George has a brand-new documentary out called ‘To Be Takei‘. A director named Jennifer Kroot followed George and Brad for three years and even got Howard to be in it, which is almost impossible.

The documentary covers George’s childhood in an internment camp, his show business career, and his almost thirty-year love affair with Brad. One thing it probably doesn’t capture is the couple on Sunday mornings, when they wrestle in the nude and have sex.

You probably know almost every detail by now, but Brad showers and then George showers, When George enters the bedroom nude. Brad rises and they grapple and wrestle and end up blowing each other.

‘We like feeling each other up with our muscles flexed!’ George said, giddy with excitement. ‘I go for an armful of ass.’

The whole saga is funny every time George tells it, and today we got a new bonus revelation – George steals soap and shampoo from hotels and uses them at home. He swears it’s not him being cheap, it’s about ‘not wasting’.

As for his longtime feud with his Star Trek co-star William Shatner – it persists. Howard asked George if some of the facts in the book ‘Encyclopedia Shatnerica’ were true and most of them were. Bill Shatner did sit on a taller chair than most of the rest of the cast and referred to them as ‘the seven dwarfs’, and he did have his cast members’ lines cut in favor of more close-ups of himself.

Don’t miss George’s documentary ‘To Be Takei’ and keep an eye out for his Broadway show ‘Allegience’, which is heading for the Great White Way soon.