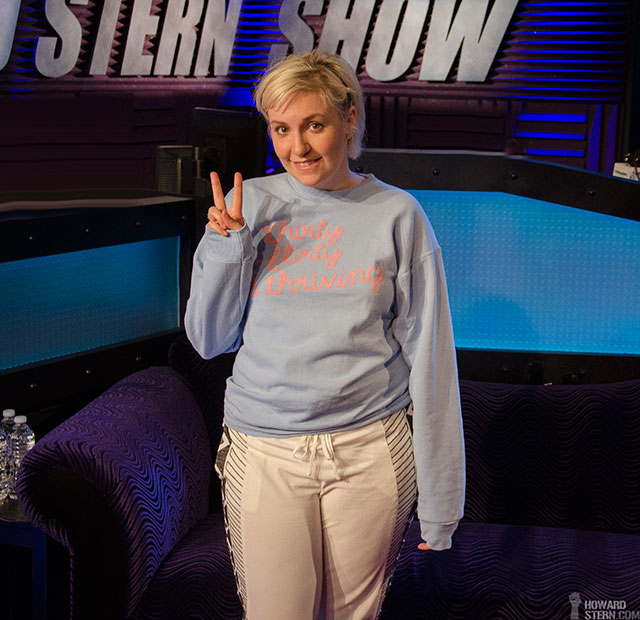 If Howard were 27 and female, he might be something like Lena Dunham. They at least would’ve gotten along pretty well – which they do even with the age and gender difference.

Lena stopped by this morning to promote her book “Not That Kind of Girl.” Here are just some of the stories you can expect from Lena’s remarkable life:

Lena, like Howard, suffers from Obsessive-Compulsive Disorder. As a kid, Lena recalled, she would force herself to imagine her parents having sex a certain number of times, then memorize all the toothbrushes in her house, just in case a scenario occurred where she had to identify toothbrushes.

At nine years old, Lena wrote a vow of chastity on a piece of paper and ate it. She promised to remain a virgin until after high school (and, for better or for worse, she kept the promise).

Lena also opened up about being raped in college. She told Howard she chooses to speak about it because she feels it’s important to let girls know that “no” means “no,” since sexual assault can occur at any point – just because a girl is kissing a guy does not mean that she has to have sex with him. Even in the middle of intercourse, if a guy makes a girl do something she doesn’t want to do, a sexual assault has occurred.

Lena famously is not shy about showing her body onscreen. She doesn’t get aroused filming sex scenes and was surprised that Howard got aroused filming “Private Parts.” She listed some of the byproducts of getting naked and simulating sex onscreen, including getting makeup all over you by “banging” a guy who is wearing massive amounts of foundation to cover his ass acne, or “assne.” Lena also admitted to accidentally kneeing her onscreen love interest Adam Driver in the balls many times. And then there was the time she said she found a prop condom still stuck to her after she’d already gone home after a full day of shooting.

Nowadays, Lena is happy, despite the usual day-to-day gripes. She recently changed her email address so she doesn’t get hit up for favors anymore and she spends her time reading and hanging out with her boyfriend, fun.’s Jack Antonoff.

Check it out Lena’s new book and don’t miss her smash hit show “Girls” on HBO.