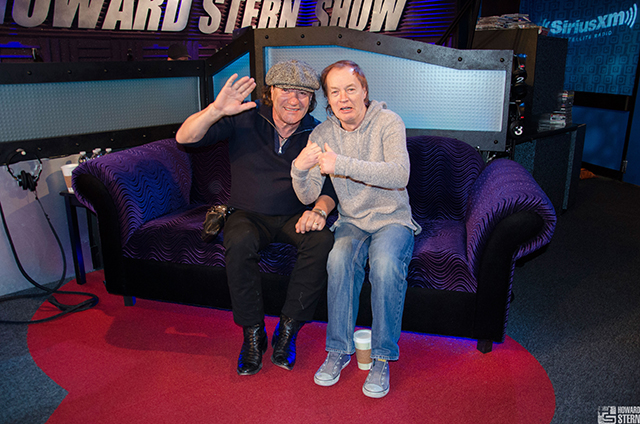 AC/DC is a very special band to the Stern Show (not to mention the world). They’ve been guests on the show for years, there have been many, many song parodies to their music, and they were even in “Private Parts.”

Not only is their music great, not only are the guys funny, but they’re also genuine, open and down-to-earth.

Here are the highlights from Howard’s interview with Brian Johnson and Angus Young:

As you know, Brian had the unenviable task of replacing AC/DC’s original lead singer Bon Scott when Bon died in 1980. Thankfully, Bon had seen Brian perform and compared him to Little Richard.

Brian shouted and rolled around on the floor and gave a passionate performance that was one of the best Bon had seen. It turned out Brian was in excruciating pain and needed to have his appendix out.

Brian was incredibly nervous when he first took the stage with AC/DC in Belgium – but there was one ‘Long Live Brian’ sign amongst the wall of “RIP Bon Scott” signs. That gave him hope.

The first song Brian wrote with the boys was “You Shook Me All Night Long” and from there, they were able to do what is almost unheard of in show business: continue being a great, beloved band despite losing their original frontman.

As for the recent AC/DC news, their drummer was accused of hiring a man to murder his dentist (the charges were dropped). The boys haven’t sorted out if Phil will remain in the band.

As for their rock icon peers, Brian is a fan of Freddy Mercury and Robert Plant, while Angus’s guitar hero is Jimi Hendrix.

Check out AC/DC’s new song and album “Rock or Bust,” which everybody loved (and Robin Quivers REALLY loved).