The biggest movie star in the world – no, not Brad Pitt, Robin – Robert Downey Jr. made his triumphant return to the Stern Show studio this year. He spoke twice at the Howard Stern Birthday Bash, but it’d been a while since Howard and Robert had had an in-depth conversation on the air.

Here Are the Highlights of Howard’s Interview with Robert Downey Jr.:

Howard heard that while filming ‘Weird Science’, Robert took a shit in co-star Kelly LeBrock’s trailer. It wasn’t Kelly, it was another actress named ‘Babette’, and Robert shit right on the chair in her trailer. It all stemmed from Robert’s desire to prove that he was outrageous. Producer Joel Silver lined everyone up and demanded to know the identity of culprit. Robert didn’t admit it was him, but said he wish he had been the one who did it.

Robert is happily married to his lovely wife Susan, but he was in a long-term relationship with Sarah Jessica Parker – the two were together for seven years. Howard asked if they still speak and Robert said he plans to make it a point to try to see her while he’s in New York. Howard asked how Sarah Jessica’s husband Matthew Broderick would feel about that and Robert said he’d ask Matthew if it was all right.

Robert recently said in an interview that he would only do an Iron Man 4 if Mel Gibson directed it. Howard didn’t understand that comment, and Robert clarified that it was much more off-handed than it came across in print and there are no plans at all for an Iron Man 4. He is, however, friends with Mel Gibson. 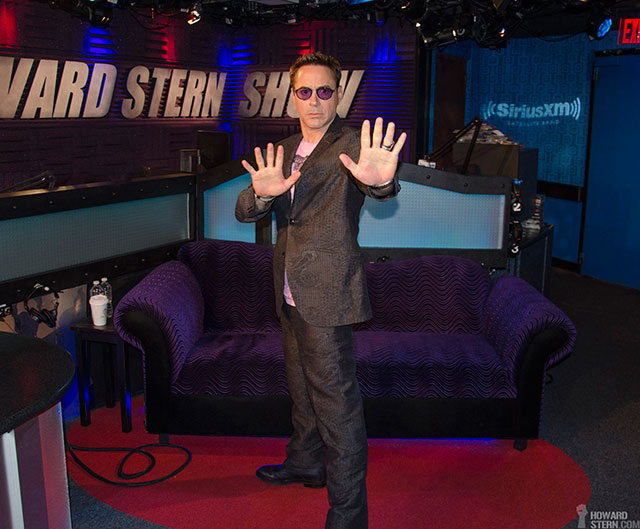 Howard asked if Robert got aroused during his sex scene with Leighton Meester. Unlike most other actors, Robert admitted that he might have been a little aroused, but not too much. ‘Professionally aroused’ is how he put it.

Robert has a secret project coming up – he revealed it to Howard during the break and Howard promised us it would be awesome – but the upcoming project he was willing to talk about was his version of Pinocchio where we would play Geppetto. Robert promised that it is ‘off the ground’ and he even asked if Howard and Robin would make cameo appearances. Howard said screw a cameo, he wants the role of Pinocchio.

Howard and Robin both loved Robert’s new movie ‘The Judge’ and they weren’t the only ones. Howard reported that the screening they went to – which was chock full of critics – was applauding wildly.