Since Gary organized such a wild, glamorous, star-studded Birthday Bash for Howard in January, Howard decided to return the favor. Without the food, booze, guests, theater or performers, though.

All Gary got was the love that Howard and Robin had for him and a very funny trip down Baba Booey Memory Lane.

For the record, Gary named the squirt in the eye the worst moment in his career. 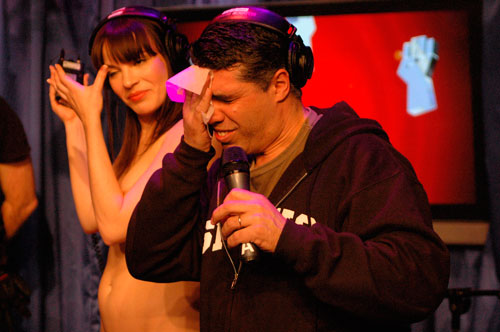 You’re looking at the worst moment of Gary’s career

As the festivities rolled on, NAACP Image Award winner Robin Quivers made a short speech, saying the years of working with Gary have always been a pleasure.

And even the star of “Sharknado 2” himself, Benjy Bronk took a moment from his busy schedule to wish Gary a very happy birthday.

Gary was also treated to a beautiful love song from his girlfriend Jon Hein and stunning Happy Birthday songs from Mark the Bagger and fitness icon Richard Simmons.

Gary, unfortunately, was busy producing the show, so he wasn’t even invited to his own Birthday Bash.