Prolific actor discusses his career, his philosophy, and playing the Dude in “The Big Lebowski” 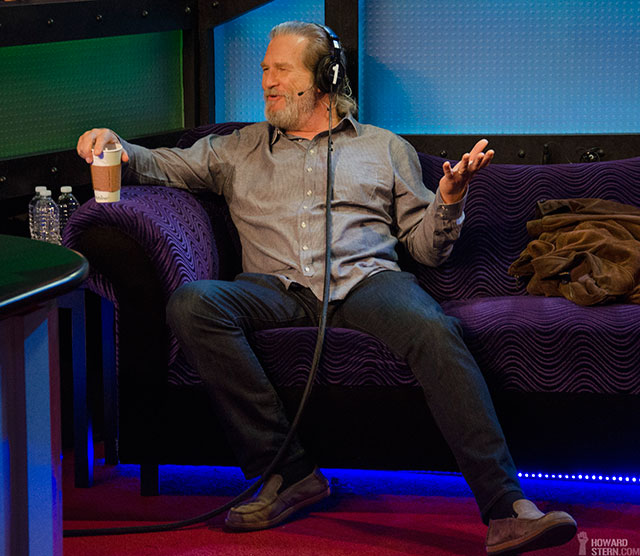 Jeff Bridges — yes, the man who portrayed the Dude in “The Big Lebowski” as well as many other memorable characters — stopped by this morning for the very first time.

He comes from a showbiz family, his dad was Lloyd Bridges and his brother is Beau Bridges, and he told Howard his natural reaction was to shy away from acting but that eventually he was seduced by Hollywood.

Still, Jeff said he lives an easy life when possible. “I resist working as much as I possibly can,” he said.

Jeff told Howard he once created a painting based on a dream he had. In it, he’s navigated a boat down a river. The river was filled with whirlpools that each contain a beautiful jewel and Jeff had to resist the urge to reach for the jewels, or he’ll be sucked in.

The painting — called “Jeff Makes a Decision” — has become something of a philosophy he uses for his career. He said the jewels are film projects and that he must be selective and try not to be swayed.

Here are only some of the “beautiful jewels” Jeff talked about with Howard:

“The Last Picture Show”— Jeff’s first breakout role, he was 21 when this future classic hit the big screen. Cybill Shepherd played his love interest and she was a knockout. He told Howard he became smitten with her but that she was involved with the movie’s director Peter Bogdanovich.

“King Kong” — “King Kong” took nine months to shoot and Jeff admitted that it was sometimes a pain, but he said his co-star Jessica Lange was incredible. He also shared a story about the production of the movie, including how they had one guy working each finger of the giant gorilla hand and once almost crushed Jessica.

“Iron Man” — Jeff said he approached this Marvel movie as a “$200 million student film” because director Jon Favreau was writing the script as the shooting went along. Jeff said this process threw him for a loop at first, but said the spirit of collaboration eventually worked out for the best and now many consider “Iron Man” to be a contender for greatest superhero movie of all time.

“Heaven’s Gate” — Michael Cimino’s follow-up to “The Deer Hunter” has been maligned by some, but Jeff said he still thinks “Heaven’s Gate” is an “incredible movie,” blaming its box office problems on the media’s dislike of Cimino as well as the changing times. Jeff said MTV was at its peak when the movie came out and everyone had come to expect fast, choppy cuts, but that “Heaven’s Gate” was a long, slow western.

“Masked and Anonymous” — Jeff told Howard he was excited to do this movie with Bob Dylan, a musical hero of his. He said they shot the movie in only three weeks but that Jeff still found time to jam with Dylan in his trailer.

The Jewel That Got Away? — Jeff said most of stories about roles he has been offered in movies like “Pretty Woman,” “Indiana Jones,” “Jaws,” “Tequila Sunrise,” and “Ghost” are false, but he did share one that is true. Jeff told Howard he auditioned for Tom Hanks’ role in the classic ’80s movie “Big,” but said the part didn’t feel right when he was auditioning and that Tom did an amazing job with it anyway.

Howard then allowed Stern Show staffer Richard Christy to enter the studio and express his love for his faaaavorite actor from his faaaavorite movie, “The Big Lebowski.” 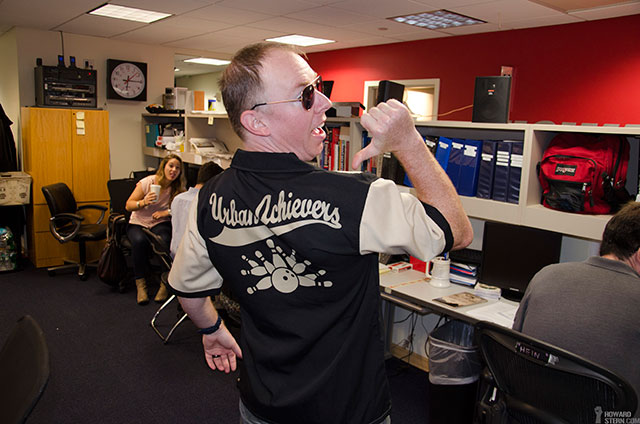 Richard bounded in wearing his Lebowski bowling shirt and carrying an official certificate which proved his fandom. “I’m a Dudeist Priest,” he proudly proclaimed.

Jeff seemed genuinely enthused to meet Richard, who of course got emotional when talking about the scene in “The Big Lebowski” where The Dude is driving along and banging on the dashboard because he’s so happy. Richard eventually likened his Monday morning experience to a Christian being in same room as Jesus.

Check out Jeff’s new movie “The Giver,” his band the Abiders, and the close-to-his-heart No Kid Hungry Campaign.