Dave Grohl and band share origin stories of songs "Monkey Wrench," Best of You," and "My Hero" 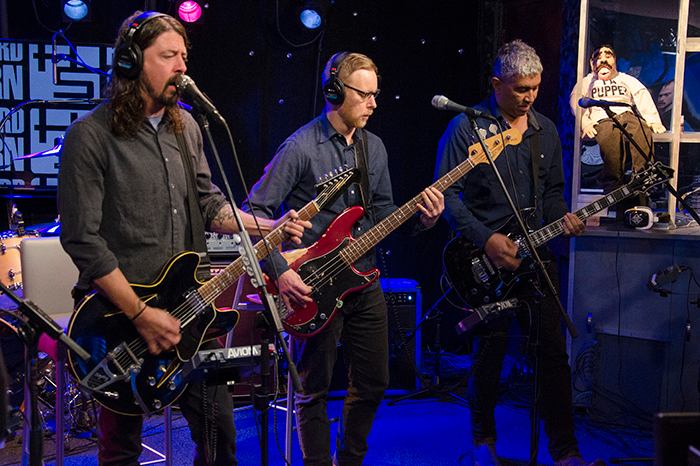 Dave Grohl and the Foo Fighters have been longtime fans and friends of the Stern Show, but the full band has never shown up to rock out. Since his first – and now legendary – acoustic performance of “Everlong” Dave has played many Foo Fighters hits solo.

This year, all the boys showed up, played two magnificent tunes and took Howard through the history of the band.

HERE ARE THE HIGHLIGHTS FROM HOWARD’S INTERVIEW WITH THE FOO FIGHTERS:

“This Is a Call” – It’s an early Foo song made up of nonsense lyrics. Kurt had just died and Nirvana had ended and Dave wasn’t ready to open up and be emotional in his lyrics.

“Monkey Wrench” – Dave wrote this classic just before his first marriage ended. The song is about feeling like he didn’t want to ruin his then-wife’s life. Dave admitted that he just wanted to get out.

“Everlong” – A classic and a song very near and dear to the Stern Show, Dave wrote this at a time when all his assets were frozen; right in the middle of his divorce. He was living in a sleeping bag in the back room of vocalist Pete Stahl’s house and Pete’s dog pissed on him every night.

“Best of You” – Dave first heard that Prince covered this Foo Fighters track when Howard played it back in 2007. Someone from Prince’s camp had sent the song to us and Dave was floored by the cover. For reasons unfathomable to Dave, Prince played Best of You during the Super Bowl halftime show that year. Dave liked it so much that it made him want to stop playing the song himself – he felt Prince’s version was far superior.

“My Hero” – Many people think this gem is about the late great Kurt Cobain, but Dave denied it this morning. Dave recorded the guitar part and sang ‘there goes my hero’ as a filler line to show the melody. Fortunately, everybody loved the chorus, so it stuck. It’s one of Howard’s favorite songs and it’s Late Show host David Letterman’s absolute favorite of all time.

Dave recently thought about going back into the studio and re-recording all the early Foo Fighters stuff with the full band – the first album was just Dave playing every instrument – but the guys talked him out of it.

Paul McCartney recently visited the Grohl household to meet Dave’s new baby – who is named Ophelia, possibly in honor of Robin Ophelia Quivers. It wasn’t until Paul showed up that Dave realized how much Beatles memorabilia he owned – books, posters, albums. Thankfully, Macca was cool with it.

Watch the HBO docuseries about the making of the album, and don’t forget to pick up the album itself.