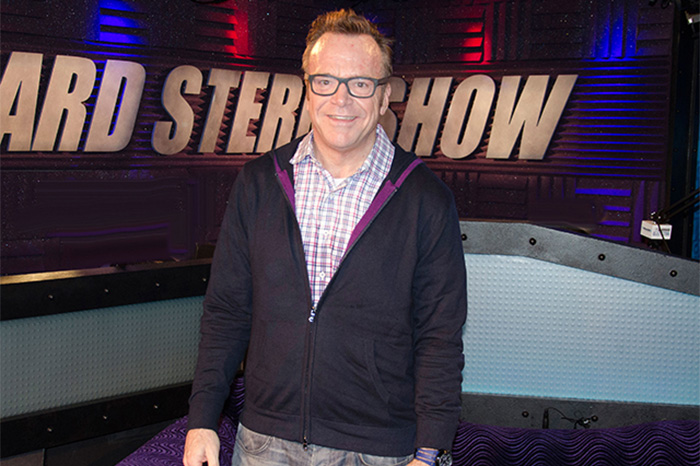 Frequent Stern Show guest Tom Arnold stopped by Tuesday morning to promote his brand new stand-up tour and the staff thought he was barely recognizable after losing quite a bit of weight. The actor and comedian soon revealed he had cut out gluten and sugar from his diet entirely.

Tom also admitted his wife gives him a list of things he can’t talk about every time he comes on the show, but he said that doesn’t necessarily stop him. He and Howard wound up discussing a variety of interesting things that have happened since his last visit to the Stern Show. Here are a few of the highlights:

The premiere topic that Howard loves to discuss with Tom is his friendship with movie star, bodybuilder and former Governor of California Arnold Schwarzenegger.

Tom revealed Arnold actually sponsors a traveling circus. One of the perks of such an undertaking is that Arnold gets to have exotic animals in his house when he throws parties.

Recently, an elephant got loose in Arnold’s living room and started destroying the house. It was especially fond of Arnold’s art, which Tom admitted was all paintings and sculptures of Arnold himself (many depicting him totally nude). “It’s him then,” Tom clarified. “Not him now.”

You might think that a person probably only has one wild animal destroy their house during a party, but not Arnold. He also had a bald eagle go nuts from the cigar smoke that permeated Schwarzenegger Manor.

As if wild animals weren’t enough, Sylvester Stallone was also in attendance at Arnold’s Christmas party.

Lest anyone think that Tom’s wild life is only exciting when he’s at Arnold’s, he can turn even a casino stay into something downright hallucinatory.

Tom reported befriending a woman who drove an ambulance in Las Vegas and she offered him a milkshake. It wasn’t until Tom downed two of them that things got weird.

“It was like … down the rabbit hole,” he explained.

His wife made him fly home and immediately took him to the doctor — where they found absolutely nothing in Tom’s system.

Tom said he once had a similar experience with Robin Williams while they were filming the movie “Nine Months.” He said Robin and Tom went on a diet during the shoot where they ate nothing but turkey and mustard and took fen-phen for two weeks. He said one night they both thought they were going to have a heart attack.

Tom said he and his first wife Roseanne Barr have maintain contact since he appeared as the surprise guest at her Comedy Central Roast.

One Sunday night, as he relaxed in bed with his wife, Tom got a text from Roseanne that said “Are you up?” It wasn’t a booty-call, Roseanne just wanted Tom’s help on a script she was writing.

He said they worked on it together for three hours over the phone.

Speaking of TV, Tom’s new show is a revolutionary and fascinating concept: he wants to take celebrities to visit people who have trash-talked them on the internet.

For more Tom Arnold, check out his website for tour dates and catch him hosting “My Big Redneck Family.”

RICHARD CHRISTY STILL LOVES BEER AND EVERYTHING ELSE